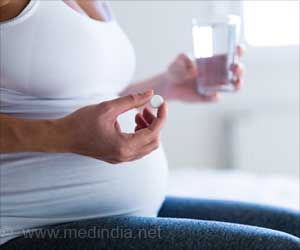 Pregnant women who are exposed to antithyroid drugs (ATDs) during the first trimester are associated with increased risk for congenital malformations, reveals a new study.

The risk is much higher particularly for women receiving prescriptions for methimazole (MMI) or both MMI and propylthiouracil (PTU).

Advertisement
‘Exposure to methimazole (MMI) or propylthiouracil (PTU) during the first trimester increases the risk for congenital malformations.’

The findings are published in Annals of Internal Medicine.


Researchers from Sungkyunkwan University School of Medicine, Gangnam-gu, Seoul, Korea, conducted a nationwide cohort study to examine the association between maternal prescriptions for ATDs and congenital malformations in live births.
Advertisement
The study included a cohort of 2,886,970 pregnancies linked to live-born infants in 2,210,253 women between 2008 and 2010. Of those, 12,891 pregnancies were exposed to ATDs during the first trimester.

The data showed that prenatal exposure to MMI and PTU during the first trimester resulted in relative increases in the risk for congenital malformations of 31 percent and 16 percent, respectively.

The increased risk for malformations associated with MMI remained among those who switched to PTU several months before their pregnancy or during the first trimester.

The researchers conclude that ATD exposure during the first trimester of pregnancy is associated with significantly increased risk for congenital malformations.

These findings confirm the importance of minimizing MMI use in the first trimester and suggest that the current recommendation of switching from MMI to PTU after pregnancy detection should be reconsidered.

Multivitamins During Pregnancy Can Lower Risk of Autism
Supplementing multivitamins during pregnancy influences brain development and could reduce risk of ....

World's First Flushable Pregnancy Test is Ready
After the nerve-wracking wait for your home pregnancy kit to show single or double line, the next .....

Birth Defect - Structural Defects
A structural birth defect means that a specific body part is missing or mal-formed during the embryo...