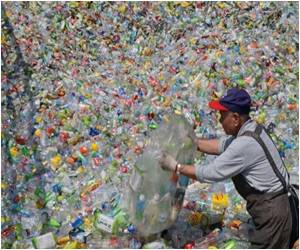 In the yard of a recycling station in Taipei, some 40 people stand ankle-deep in used plastic bottles stamping them flat in the first step of a process that will transform the junk into usable goods.

"Plastic bottles won't be decomposed even if they are buried for 1,000 years so we started to recycle and re-use them to reduce garbage and pollution," said Chien Tung-yuan, a spokesman for the foundation.


"The used bottles are being treated and processed in a 13-step procedure to be made into textiles such as blankets and clothes and even dolls."

Tzu Chi runs 5,400 recycling stations across Taiwan with the help of more than 76,000 volunteers and has distributed more than 460,000 blankets made from plastic bottles since 2007 for relief use at home and abroad.
Advertisement
For the volunteers in charge of crushing the plastic bottles, who are from two nearby nursing homes for the mentally ill, the recycling work has also become part of their therapy, Chien said.

"They come in twice a week as the simple task helps them concentrate and stabilise their emotions. It's not only therapeutic for them but also for a very good cause."

Taiwan started recycling plastic more than a decade ago and today it boasts more than 70 percent recycling rates, according to the Environmental Protection Administration.

Taiwan made international headlines with the "eco-fabric" used to make the jerseys for nine teams in the 2010 football World Cup in South Africa.

Taiwan Gets First Barbie-Themed Restaurant
A Taiwanese restaurant group has launched the first Barbie-themed restaurant in the country....

Taiwan Sees Record Number of Births in Year of Dragon
In Taiwan, the number of newborns has reached a nine-year high of 234,599 last year during the ......