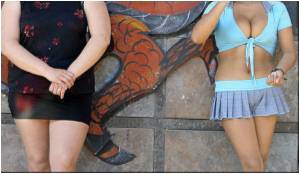 The Taiwan government is planning to establish legal red light districts which will help to police the sex trade more easily and protect rights of the sex workers.

Under the proposal, sex workers would be able to apply for licences to operate in authorised zones and would be punished for plying their trade elsewhere, along with their clients.

Prostitutes currently face three days in jail or a fine of up to Tw$30,000 ($1,000) if they are caught providing sexual services while their clients go unpunished.


"The government intends to open up the sex industry to a moderate degree to better regulate it in accordance with the majority of public opinions," said Liu Wen-shih, of the interior ministry, which is due to submit the proposal to the cabinet next month.

A poll commissioned by the ministry late last year found that 76.5 percent were in favour of conditionally opening up the sex trade while 14.5 percent wanted a ban and 7.6 percent supported unconditional opening.

The ministry dropped an earlier plan to allow small-scale brothels without zoning because it would be too difficult to keep a tab on them, Liu said.

While there is no official figure for the scale of Taiwan's sex industry, observers estimate it involves hundreds of thousands of people and generates billions of dollars a year.

Animation on how to use Female condom and its advantages.
<< Lose Weight in 17-days
Novel Study Reveals How Cigarette Smoke Affects Smokers >>

News Archive
News Resource
News Category
Couples, Beware! 8 Expectations That can Break Your Relationship Bad Posture While Using Mobile Phones can Cause Back and Neck Pain Co-workers: As Role Models for Healthy Eating and Lifestyle Habits Shameful Surprise: Digital Make-up Mirror Brings a Sense of Fakeness and Embarrassment Signs of Insecurity in a Relationship
More News
Sign up for Wellness Consult a Doctor Sign up for Selfcare