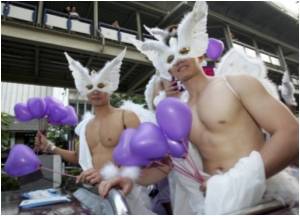 From flamboyant parades to symbolic same-sex weddings, taboos surrounding homosexuality are slowly crumbling in Vietnam, but activists say only freedom to marry will bring true equality.

Homosexuality was once viewed as a "social evil". In the latest celebration of the small but significant legal gains for the country's lesbian, gay, bisexual and transgender (LGBT) community, around 300 people joined a colourful bicycle parade through the narrow streets of Hanoi on Sunday.


It was the country's third -- and largest -- gay pride event, as increasingly tolerant attitudes gain ground in a nation where conservative Confucian values and traditions still dominate, particularly in rural areas.


Vietnam's main cities, from the capital Hanoi to southern Ho Chi Minh City, have small but vibrant gay night life scenes. And the authoritarian country now finds itself among the most progressive nations in Asia in terms of its approach to sexuality.

In 2012, lawmakers even mulled changing the law to permit same-sex marriage -- a move which would have catapulted the Vietnam to the forefront of gay rights in the region -- but it stopped short.

"We really want Vietnam to fully legalise same-sex marriage... so we can own property and adopt a child together," Dao Le Duc Nghi, 30, told AFP.

Nghi "married" his partner Nguyen Cong Luan in April at a "happy wedding" which just five months earlier would have likely been broken up by local officials.

"Both sets of parents were there. We had around 200 guests. We informed local authorities and they told us to go ahead," Nghi told AFP.

But the couple, who run a small restaurant called Pe De Crab Noodles -- Pe De means gay in Vietnamese -- in southern Binh Phuoc province, say they are hoping for changes which will grant their symbolic union the same legal status as a normal marriage.

"They will legalise same-sex marriage eventually," Nghi said. "There is no reason not to."

For now, the government disagrees. It says Vietnam's conservative rural population is not ready to accept same-sex unions.

"In the last few years there have been big changes in public opinion," said sociologist Le Quang Binh, adding it was "a big disappointment" that same-sex marriage had not been legalised.

There was a clause in a new family law which would have extended some legal protections to LGBT couples regarding property rights and adoption.

But it was removed by the National Assembly at the last minute.

This means that same-sex couples still cannot own property together or jointly adopt children.

Trinh Thi Thanh Binh, deputy-in-charge of social affairs at the National Assembly, told AFP that the removal of fines for same-sex wedding parties was still an important step.

"Homosexuals are like anyone else, they have the same rights as everyone else," she claimed.

Binh conceded that the LGBT community had suffered discrimination, leaving many people feeling unable to come out to their families or live with their partners in public.

"But the law protects the rights of all citizens, whether they're the majority or minority," she said, asserting that removing the wedding party fines had improved life for gay couples.

The numbers at Sunday's Viet Pride event may have be relatively small compared to the huge street parties hosted by western capitals such as London, Berlin or Sydney.

But activists insist their movement is snowballing.

The first year the parade was held, Vietnamese journalists from state-run media covered it reluctantly -- and only after the event received widespread international coverage.

This time around, local television and newspapers have beaten a path to Nguyen's door.

"They're serious about this," she said.

Hanoi is frequently criticised by international watchdogs for human rights abuses, making it seem an unlikely champion for the region's LGBT community.

"But eventually the LGBT community in Vietnam will expect more."

Beijing Court Hears Landmark Case on Gay 'Conversion Therapy'
As an activist in a nurse's uniform knelt over a patient, wielding a giant needle, the Beijing ......

Stigma Blocks Access to Care for Young Gays and Transgenders: AIDS Conference
Young men who have sex with men (MSM) and transgender people shared their experiences of external .....

Drop in HIV Diagnoses in US, Except Among Some Gay Men
More than 30 percent drop in the rate of HIV diagnoses is seen in the United States over the past .....

Archie Comics Featuring Gay Marriage Banned in Singapore
A volume of the long-running Archie comic series has been banned due to its depiction of same-sex .....