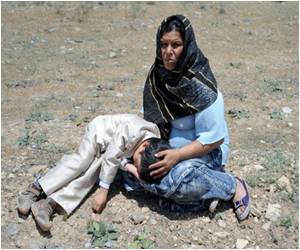 Despite the slump in maternal mortality rates in Afghanistan, thanks to the foreign aid-funded healthcare, nearly 500 out of live births still end in death, finds a national survey.

Three times Hasrat Bibi gave birth. Each time her baby died before reaching the outside world. After the third, she was left a social outcast and unable to have more children, but in Afghanistan her story is all too familiar.

Medindia offers you a useful calculator to find out if you fall under the high risk pregnant group. Take the precautionary steps and avoid complications during pregnancy.
Advertisement

Bibi first fell pregnant as a teenager 22 years ago. Her body may have been too young to cope with nine months carrying a child, but she was living in a society where motherhood is considered a woman's primary, if not sole purpose.


Yet having a baby can be treacherous in Afghanistan, where new figures show that one woman dies every two hours from pregnancy-related causes and nearly three percent of babies are stillborn.

Anemia is the commonest blood disorder that may occur in pregnancy and is usually due to low iron or folate reserves of the body and this is reflected as anemia.
Advertisement
In Bibi's case, her experience of childbirth left her with a complicated fistula -- a hole next to her urinary tract -- that has left her incontinent and unable to bear more children.

Health professionals in Kabul now fear that improvements paid for by Western donors through 10 years of war could stagnate as NATO combat troops carry out a staggered departure, leaving more would-be mothers at risk.

Bibi's face, dotted with traditional rough blue tattoos, crinkles into tears as she tells how her condition has left her shunned, even by her husband.

"Because I'm always wet and the urine smells, other women won't speak to me. Even my husband," she says, wiping tears from her pierced nose with her scarf.

Families living in remote, impoverished communities rarely understand the seriousness of medical issues, and local provision is scant. Transportation to the nearest health facilities can take several hours on foot or by donkey.

And most women live in purdah -- unseen by men outside their families -- and may be house-bound and unable to see a doctor.

Bibi, who comes from a rural village in the eastern province of Ghazni and doesn't know how old she is, said she had no proper help for 10 years.

With UN funding, she has now been sent to Pakistan for treatment, and an operation there to mend her fistula has a 60 percent chance of success.

Although there is a fistula centre at Kabul's Malalai maternity hospital, it was unable to help her because of a lack of trained staff and medical supplies.

The centre recently received another patient, a mother of six, who does not want to be named for security fears, but who is now recovering after an operation on a fistula she developed three years ago following a stillbirth.

Doctors say her husband threw her out of their home because of her condition -- taking three of her children away from her, selling off the eldest daughter, and arranging to marry another woman.

The 35-year-old has been living in a tent, her remaining children forced to beg to survive.

On average, Afghan women each give birth to five children. Two of every three births happen in the home without trained help because of social customs and a severe shortage of midwives, the new national report showed.

The figures come from the Afghanistan Mortality Survey 2010, which was carried out by the Afghan Public Health Institute, Ministry of Public Health and Central Statistics Organisation, across 87 percent of the country.

It did not include rural parts of the southern provinces of Kandahar, Helmand and Zabul, where the Taliban-led insurgency is rife.

Despite the dire conditions, aid-funded improvements now mean that fewer women die during pregnancy and childbirth, and more children are living past their fifth birthday than at any time before, the report shows.

The US State department welcomed the report's "encouraging trends", which partly resulted from a US, UN and World Bank-funded education programme that has bumped the number of midwives up threefold since 2003.

Each midwife's training costs $12-18,000. The women spend two years studying in one of 34 provincial centres before returning to work in communities.

The training focuses on preventing post-birth haemorrhage, which is responsible for most deaths.

But plans to move responsibility for the programme from foreign donors to the ministry of public health next October have left medical experts fearful.

Instead of money flowing from aid donors directly, the central bank and health ministry will be charged with routing funds.

"This is a very big concern because it's not just money but a technical issue," said the UN's Dr Mohammad Tahir Ghaznavi, voicing concern that the increased bureaucracy would sap funds and cause delays to payments.

Jobs would also need to move to the public sector, with ministries unlikely to match foreign wages which have so far been paid to recruited midwives.

"If it's decentralised, is the government willing to hire all these people?" Ghaznavi added.

A recent World Bank report showed that Afghanistan, one of the poorest countries in the world, is likely to need around $7 billion a year from foreign aid after the scheduled departure of all international troops in 2014.

While NATO is urging foreign donors to continue giving money to Afghanistan after combat troops depart in 2014, the economic crisis in the West and corruption in the war-torn country make a downturn in financing likely.

"Transport and health are highly vulnerable," the report said.

Pregnancy is a time when a female blossoms into a woman with an experience never felt before. Here are a few self-care tips for pregnant mothers that will help them during their pregnancy.
Advertisement
<< Treating Third-Degree Burns: Hydrogel Helps Grow New, Scar-...
Spread of Cancer can be Predicted by Molecular Markers >>

If you are trying to find out whether you have conceived this time around, you can ask other people, worry in silence or take this quiz on early signs and symptoms of pregnancy.
Advertisement
News A-Z
A B C D E F G H I J K L M N O P Q R S T U V W X Y Z
What's New on Medindia