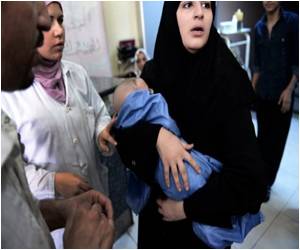 In Syria's Latakia province, Umm Abed once worked as a nurse at a military hospital treating wounded soldiers, but when army shelling killed her brother and mother she decided to switch sides.

"How could I continue to treat (the soldiers) who killed my mother and brother," asks the 27-year-old, her face encircled by a black veil that cascades over her black overcoat.

Umm Abed abandoned her post at the hospital in the northeastern province to staff a makeshift hospital facility in the rebel-held area of Jabal al-Akrad. She is now treating wounded rebels and civilians and those who have fallen ill from poor diet or contaminated drinking water.


She works in the town of Salma, once a beautiful summer resort, but now the almost daily target of government shelling.

Jabal al-Akrad is strategic for both the rebels and the regime of President Bashar al-Assad, because it is bordered on the south by the stronghold of the ruling clan -- the Alawite mountains.
Advertisement
The Assads come from Lattakia province and belong to the Alawite religious minority, an offshoot of Shiite Islam, for which the mountains are named.

When she left the military hospital, Umm Abed, a Sunni, left behind her friends, including an Alawite with whom she was "very close."

"When I left my job, she asked me why I was leaving. I told her what had happened to my brother and my mother," Umm Abed said.

"I was very surprised when she sent me a letter calling me a terrorist," the standard regime term for rebels.

"I wish could go back to how we were before," she adds, saying she remembers having good relations with members of the Alawite community when she was growing up.

"We were brothers and we should have stayed that way, but they changed and launched a sectarian war," she says.

Umm Abed is one of four women who works in shifts day and night to receive and treat the sick and wounded.

Her colleague Manal has been running the pharmacy for the past 10 months.

"When I arrived, there were just three or four of us working in the hospital. I looked around and realised that I was the only girl in all of Jabal al-Akrad," she says.

Her family fled the area, but she says she decided to stay because of the scope of the needs of the population left behind.

"I became stronger than a million men," she says with a smile, her eyes lined with kohl.

She trained on the job to learn how to treat shrapnel wounds and how to deliver emergency care even as shelling goes on all around.

The staff live in the hospital, or in houses nearby, and are available 24 hours a day. They speak to their families by phone at night, when the generator allows them to recharge their batteries or use the Internet.

Some of them haven't seen their families for months, but they have created one of sorts in the hospital.

"Here, we discovered solidarity. We work hand-in-hand, men and women, to help other people," one of the women working at the hospital says, declining to give her name.

"They can bomb as much as they want. We're not afraid anymore," she says, as the shock wave from a nearby airstrike shakes the building.

Divorce Rate Spirals in Syria Due to Prolonged Crisis
A new media survey has found that divorce rate has gone up by 45 percent and marriage rate has ......

UN Says Conflict Making It Impossible to Provide Food Aid to a Million Hungry Syrians
The ongoing conflict in Syria is making it impossible to help provide food aid to more than one ......

Normal Life a Distant Dream in Syria's Second City
It is a testimony to the hard times that the benches in Hawas park in the battered city of Aleppo .....

From Syria War Tourism, Bored Japanese Gets Kick
Toshifumi Fujimoto, a Japanese trucker is bored with his humdrum job, a daily run from Osaka to ......