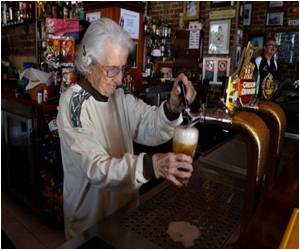 Lil Miles, Sydney's oldest barmaid, aged 91, has never been a drinker, and isn't tired yet of pulling beers.

"I'll keep going," said the diminutive great-grandmother, even though the Sydney pub scene has changed vastly from the wild days of the 1970s when big spending sailors and dockside workers kept the hotel busy.

These days Woolloomooloo is famed for its expensive harbourside restaurants and cafes. Without the wharf workers, and with fewer tourists coming in for a drink, electronic poker machines bring in some of the revenue once generated by a crowded front bar.


It's a far cry from the 1970s when many of the cottages in the working-class inner city suburb were empty and derelict, while its proximity to the wharfs, the Garden Island Naval Base and the nightclub zone of Kings Cross meant it was a tough neighbourhood.
Advertisement
Was it wild? "Oh yes it was," said Ireland-born Miles, reflecting on her time at the hotel that has brought its joys as well as personal tragedy.

In those days, some hotels in the area allowed prostitutes to be "raffled" to the highest bidder on their premises. "It wouldn't happen today," she added.

"They used to raffle the girls -- I won't tell you which hotel -- and you'd get a girl for the night. And then, the next publican, he raffled the boys. And they got a bigger crowd, much, much bigger. So there you are. Not here."

The Hotel would see its own action, said Miles, with sailors competing in relay races around the block with burning rolls of newspaper stuffed down their backsides.

"One night there was three sailors leaving... one was lit, he'd been around the block, and he'd light the next one. Oh, it was so funny," she said.

"They were just homeless boys, away from their homes," said Miles, her silvery-white hair held neatly back with pins.

Miles and her late husband John took over the Bells Hotel in 1973, living upstairs with their six children. They worked hard to make ends meet in an area with plenty of pubs, including the Woolloomooloo Bay Hotel opposite.

Back then, the managers knew each other and were friendly.

"When we first came here, we were borrowing glasses off them, and they'd borrow glasses off us and we'd go crook if they didn't return them clean," Miles says.

When times were tough, Miles would visit the brewery in the city and argue for the price of the kegs to be dropped temporarily. She was never refused.

The 1970s were a time of radical change in Sydney, as developers fought with community activists and unionists over plans to tear down historic areas of the former colonial town, including the site of the first European settlement in Sydney known as The Rocks and Woolloomooloo, for redevelopment.

For years, developers sought to demolish the lowly workers cottages that populated the area and replace them with high-rise office buildings. Landlords held back on improvements, homes fell into disrepair and residents were gradually pushed away.

Woolloomooloo was spared from office highrises but gradually the wharves saw less use as new container ports, cruise liner facilities and airports were built elsewhere and the workers moved on.

Its giant Finger Bay Wharf lay derelict and decaying for almost a decade.

But in the 1990s work began on its conservation, and it has been redeveloped to include a boutique hotel, restaurants and luxury apartments which are home to the likes of Hollywood star Russell Crowe.

But the publican's lot did not necessarily become easier, with Miles suffering more than her fair share of grief. One of her sons, Shane, died from head injuries after a brawl in the pub in 2004.

"It wasn't his night on and they got very busy and they asked him to come down and work," she recalled, saying there had been an altercation in the bar and Shane ended up being hit in the head with a bar stool.

It was a shock to an establishment that, despite its location, was not known for being a rough pub but instead "a country pub in the city".

Despite the changes she has witnessed, Miles says the qualities of a good barmaid haven't altered much.

"You've got to be a listener I think. Because all the old blokes tell you about their aches and pains," she chuckles. "It's been really great."

She does the jobs she says "the others don't want to do" such as taking the money out of the pool tables and making sandwiches for the lunch crowd.

"If they get a delivery, I pull the beers," she adds.

"I've loved every minute of it. It's been a good life."