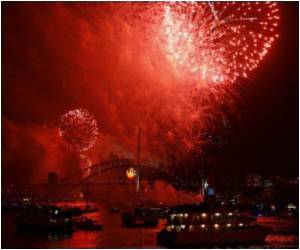 Sydney welcomed the New Year with a spectacular display of fireworks over Sydney Harbor to mark the beginning of 2012.

Hong Kong staged a similar fiesta over its own famous harbor but the mood was more sombre in Tokyo, overshadowed by the memories of the earthquake and tsunami that hit Japan in early 2011.

Is it possible to make your new year resolution work? Here are a few tips that might be of help.
Advertisement

Sydney's harbor erupted in a blaze of color and light on the stroke of midnight with a 12-minute pyrotechnic display drawing more than 1.5 million people to crowded foreshores and city landmarks.


Shapes of clouds and hearts floated above Australia's biggest city, while glittering lights cascaded off the focal point of the display, the Sydney Harbor Bridge, as fireworks launched from barges and rooftops exploded overhead.

In an early New Year resolution, Chris Evans has vowed to take yoga more seriously in 2012 in a bid to ease his aches and pains.
Advertisement
"Every year we make sure our celebrations are bigger and better than the one before," Sydney Lord Mayor Clover Moore said.

Two hours later there were celebrations in Tokyo as the clock struck midnight with balloons released, fireworks set off and the Tokyo Tower lighting up in blue.

It was then Hong Kong's turn in the limelight with the city's harbor lit up by a barrage of fireworks fired from several of its iconic buildings, delighting partygoers crammed on to the waterfront and in pleasure boats on the water.

Russia's Far Eastern regions of Chukotka, Kamchatka and Magadan, eight hours ahead of Moscow, became the first parts of the vast country to see in the New Year at 1200 GMT.

Russian state news agencies reported that among the first revelers in 2012 were border guards on Ratmanov island in the Bering Strait that lies just four kilometers from US territory across the international dateline.

In Moscow thousands were expected to gather in Red Square for another massive firework display sending rockets 140 meters (400 feet) into the midnight sky.

But the sale of all alcohol was banned in a bid to prevent the revelry getting out of hand.

As the clock moved through the timezones partying was beginning at Berlin's Brandenburg Gate, in the heart of Vienna and on Paris's Champs-Elysees avenue.

Last year's "Silvesterpfad" event in the Austrian capital attracted 750,000 people to hear the New Year rung in by the great bell of Saint Stephen's Cathedral, followed by the strains of the Blue Danube Waltz.

In Amsterdam, revelers were gearing up for the first "kiss" between two giant inflatable puppets representing a Dutch boy and girl, which will "walk" towards each other as the seconds tick down to 2012.

At the stroke of midnight, the puppets will kiss as fireworks explode in an event organizers hope will become a yearly tradition in the city.

In the Paris area the purchase of alcohol was also banned along with petrol in cans in a bid to prevent a wave of car burnings that occurs annually in some quarters, while 10,000 police were mobilized.

In London crowds will see in 2012, the year it hosts the Olympic Games, with fireworks bursting above the River Thames as Big Ben chimes out midnight in a display watched by more than 250,000 people on the river banks.

And more than a million revelers are expected to flock to New York's Times Square where pop diva Lady Gaga and tenor Placido Domingo are among the star-studded lineup, and the traditional crystal ball drops at the stroke of midnight.

Mounted officers, bomb-sniffing dogs and police patrol boats were part of a massive police deployment to ensure the party passes off without a hitch.

New Zealand was among the first places to see in the New Year but heavy rain over most of the country put a damper on parties, with two major celebrations in the North Island cancelled due to the weather.

In Japan, still suffering the effects of the March 11 earthquake and tsunami that triggered a massive radiation leak from a nuclear power plant, families gathered for trips to shrines to mark the New Year.

But nuclear evacuees said they had little to celebrate after being relocated far from home and loved ones.

"I can't say Happy New Year as I don't feel happiness," said Yuji Takahashi, one of about 1,000 refugees living in a 36-storey Tokyo tower block.

In the Philippines, where killer floods spawned by tropical storm Washi have swept away whole villages in the country's south, the normally festive New Year's Day was also expected to be a sad and sombre occasion.

Secrets of Self-Control Enabling Your New Year's Resolutions a Hit

It can be arduous to stay on track with any New Year's resolution for more than a week or two, but now help is at hand.
Advertisement
<< Famous Cancer Survivor's Miracle Cure Challenged
Overuse of Botox Makes Carla Bruni's Face Unrecognizable >>

Monday could actually be redeemed from its blue reputation to serve the purpose of being the most effective day to extend to people with health messages, a new study suggests.
Advertisement
News A-Z
A B C D E F G H I J K L M N O P Q R S T U V W X Y Z
What's New on Medindia