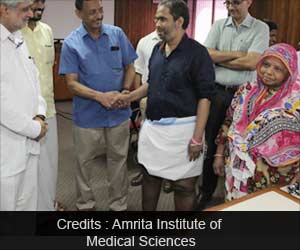 Saidalavi, a 46-year-old man regained his ability to walk again after getting 14 kg of swollen mass removed his thigh, the result of his 30 year old fight with elephantiasis. The Head, Plastic & Reconstructive surgeons team from The Amrita Institute of Medical Sciences, Kochi were successfully able to the humungous swollen mass hanging from his left thigh.

Filariasis is a parasitic disease transmitted by blood-feeding arthropods, mainly black flies and mosquitoes. There are eight different types of thread-like nematodes that cause filariasis. Most cases of filaria are caused by the parasite known as Wuchereria bancrofti.

Advertisement
‘I thank the doctors of Amrita Hospital from the bottom of my heart for enabling me to lead a normal life. It is amazing feeling to stand on my own two feet without any support. I had given up all hope and was even worried that my legs would need to be amputated if the infection spread. I have now got my life back and look forward to taking up a job again., said Saidalavi, the 46-year-old patient.’

Saidalavi was bedridden for the last two years because of the huge swollen mass which used to hang from his left thigh in a sac like structure that weighed a staggering 14 kg. He was infected with lymphatic filariasis (elephantiasis) three decades ago and had previously undergone a few surgeries, but to no avail, the swelling did not decrease.


The patient felt handicapped as even the smallest distance was to hard to cover by walking. He often needed the support of his two brothers to help him move. The family were turned down by a lot of hospitals due to the sheer size of the swelling which gave his leg a grotesque appearance. After a few years, matters become worse, as his swollen legs had begun to get infected.
Advertisement
Saidalavi's life changed dramatically one day as a team of five lead surgeons and three anesthetists at Amrita Institute of Medical Sciences in Kochi removed the swollen mass in a surgery that lasted over five hours.

"It was a complex surgery. Several complications could rise because of the patient being overweight and his inability to walk. First, we treated him for four weeks with intensive antibiotic therapy to control infection in his legs. Then, the challenge was to institute Comprehensive Decongestive Therapy (CDT) which plays a major role in preparing a lymphedema patient for surgical treatment. In Saidalavi's case, this went on for a month and involved Manual Lymphatic Drainage (MLD) and a special method of bandaging to make the legs softer by pushing the accumulated fluid to other parts of the body. The size of his swollen legs and immobility made this very difficult and needed at least four therapists instead of the usual one." said Dr. Subramania Iyer, Head, Plastic & Reconstructive Surgery, Amrita Institute of Medical Sciences, Kochi.

He also added that: "Finally, his leg was ready for reduction. It was a challenge for anesthetists to manage the big excision in such an overweight patient. Saidalavi's physical transfer to the operating table and correct positioning during surgery was also difficult and required meticulous planning. The surgery was successful and the swelling was removed. However, a massive leaking of fluid from the wound began, which would have prevented healing if sutured immediately. Therefore, we used the technique of vacuum-assisted dressing for the next seven days to suck out the fluid and reduce the size of the legs. Finally, a month after surgery, it was a delightful day for Saidalavi, his family and the lymphedema management team of Amrita Hospital to make him walk on his own without support. He will need further reduction surgery on both the legs after 6-9 months, and then he will be able to lead a normal life."

"Lymphedema is a major health problem in India, next only to malaria. In fact, the country has the highest number of lymphedema patients in the world. Lymphatic filariasis (elephantiasis) is endemic in 250 districts in 20 states, putting 600 million people at risk. Kerala has about 6 to 7 lakh cases of this disease. The patients, mostly poor and marginalized, suffer mental, social and financial losses, leading to life-long stigma and poverty. To make matter worse, an increasing number of people are acquiring lymphedema as side-effect of breast cancer therapy." said Dr. Mohit Sharma, Professor, Dept. of Plastic & Reconstructive Surgery, Amrita Institute of Medical Sciences, Kochi.

Last year, Amrita Institute of Medical Sciences opened India's most comprehensive lymphedema treatment clinic, due to the prevalence of lymphedema in the coastal regions of Kerala.

The Amrita Institute of Medical Sciences has also started a community health program in the coastal regions of Kerala, to reduce morbidity in the lymphedema victims.

Indias First Hand Transplant at AIMS Impresses International Experts
Compliments and appreciation are flowing into the Kochi-based AIIMS hospital, after it successfully ...