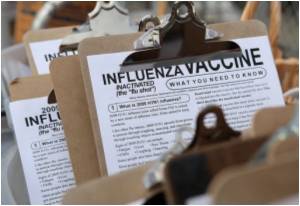 Infection from the 2009 A(H1N1) pandemic virus presented a lower risk of serious complications than other recent strains of the flu, according to US research presented Tuesday.

Analysis of influenza cases in the midwestern US state of Wisconsin showed infected individuals were younger than in earlier strains, but complications were not as likely as with the H3N1 virus that arose in the 2007-2008 flu season, said researchers at Wisconsin's Marshfield Clinic Research Foundation.

"The pandemic 2009 influenza A(H1N1) virus caused widespread transmission in the United States and other countries," noted lead author Edward Belongia and colleagues in the September 8 issue of the Journal of the American Medical Association (JAMA).


According to Centers for Disease Control and Prevention (CDC) estimates, the United States saw 43 million to 89 million infections from April 2009 to April 2010, "with mid-range estimates of 274,000 H1N1-related hospitalizations and 12,470 deaths," including seasonal and pandemic strains, said the study.
Advertisement
However in its localized study in the state, researchers compared the characteristics of pandemic and seasonal influenza infections occurring in that defined population, drawing from a pool of 6,874 patients in three flu seasons starting in 2007.

Children, which the 2009 H1N1 pandemic infection appeared to disproportionately affect, were not associated with more hospital admission or pneumonia cases when compared with seasonal H1N1 or H3N2, said the study.

"Our results suggest that the clinical manifestations and risk of hospital admission are similar for 2009 H1N1 and other seasonal influenza A strains," said the study's authors.

"The perceived severity of symptoms and risk of serious outcomes (pneumonia or hospital admission) were not increased," they added.

Only last month the World Health Organization declared the swine flu pandemic over, after the new virus spread around the world, sparking panic and killing thousands of people before fizzling out.

Swine flu killed more than 18,449 people and affected some 214 countries and territories since it was uncovered in Mexico and the United States in April 2009, according to WHO data.

The new virus spread swiftly worldwide despite drastic measures including a week long shutdown in Mexico, prompting the UN health agency to scale up its alerts and declare a pandemic on June 11, 2009.