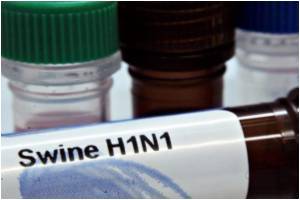 Swine flu outbreak in India have so far claimed twelve lives and nearly 110 others have been infected with the virus, the country's health ministry said.

The ministry announced in a statement late on Thursday that the victims were from the western states of Maharashtra and Rajasthan as well as southern Andhra Pradesh and Karnataka.


"The government is taking all necessary steps to curb the spread of influenza A (H1N1) virus across the country," health ministry spokeswoman S. Sharan in New Delhi told AFP.


"The states where cases had been reported have been advised to step up surveillance to control the further spread of the virus," she said.

Chest Ultrasound an Efficient Tool in the Early Detection of Swine Flu
A new research has demonstrated and recommended the use of Chest Ultrasound for an early and accurate diagnosis of Influenza A (H1N1) pneumonia.
READ MORE

Swine Flu Vaccine What Went Wrong?
The real challenge lies in convincing people about the goodness of the vaccine as a step towards disease control and public health preparedness.
READ MORE