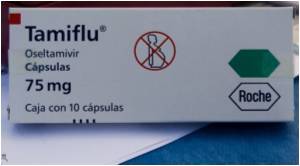 Many in Britain administered with Tamiflu during the swine flu pandemic may well have suffered a series of side-effects they were not cautioned about, the revelations are leaking now.

14 new adverse reactions were added to the drug's profile in November - more than two years after the scare.

Among the conditions are back, joint and muscle aches, fever, menstrual pain, herpes, sinusitis and earache.


These revelations come as a team of the world's leading scientists prepare to release a report about the drug's safety and effectiveness.

The renowned Cochrane Collaboration is set to release its findings on Wednesday and will claim that the drug's makers, Roche, withheld vital data during its investigation.

The real challenge lies in convincing people about the goodness of the vaccine as a step towards disease control and public health preparedness.
Advertisement
Several patients are also said to be preparing legal action after suffering alleged reactions.

The Daily Star revealed that Samantha Millard, 20, from Bicester, Oxon, who was left blind after taking the drug, is suing NHS Direct. Experts believe the legal cases could open the floodgates to more litigation.

But the Department of Health and the MHRA (Medicines and Healthcare products Regulatory Agency) say the "potential benefits of the medicine outweigh the potential risks".

In a letter to GPs the Chief Medical Officer Professor Dame Sally Davies revealed a change in policy this winter to allow healthy people to be prescribed Tamiflu. In 2009 the drug's use was limited to those with underlying medical conditions.

The MHRA has had 2,084 suspected adverse reactions reported. The drug is being linked to 13 deaths, psychotic episodes, convulsions and suicidal thoughts.

Of the 2,084 reactions there were 219 reports of nervous system disorders. And of the 435 different side effects reported to the MHRA, just 41 were included on the information leaflets with the drug.

The decision to add 14 new side effects was made by the European Medicines Agency (EMA) - in charge of licensing the drug - on November 3.

The EMA said "arthralgia, influenza, back pain, myalgia, dysmenorrhea, pyrexia, herpes simplex, and sinusitis" must be added under "common" side effects.

Roche said all new packs being sent out will include the latest side-effect information.

"The update to the information for Tamiflu was routine and did not change the way this medicine is used," said the EMA.

"There is inevitably a delay between the decision to update the product information and the time it takes to reach all patients," it added.

The MHRA also commented on the investigation.

"The discrepancy you noticed during your investigation will be due to leaflets possibly being out of date while stock moves through the supply chain," said the MHRA.

"This is likely given that the variation to amend the text in the Patient Information Leaflet and Summary of Product Characteristics was granted in November 2011," it added.

Is the world in the grip of its first influenza pandemic in forty years? It definitely seems so! The current swine flu or pig flu disaster traces its origin to the badly- hit State of Mexico.
Advertisement
<< Send One Last Message from Your Grave With New Facebook App
Reports Indicate 'Hundreds' of Austrian Women Had PIP Implan... >>

Health Risks of Eating Pork
News Archive
News Resource
Advertisement
News Category
Death Caused by a Rare Type Amoeba: Research Study Japan Approves Smallpox Vaccine for Monkeypox Did Human Evolution Shrink Your Brain? What to Do When Your Asthma Medication Doesn't Work? Which is Better to Improve Smoker's Health  Cigarettes or E-Cigarettes?
More News
Sign up for Wellness Consult a Doctor Sign up for Selfcare

Find a Hospital Find a Doctor Post-Nasal Drip The Essence of Yoga Hearing Loss Calculator Drug Side Effects Calculator Nutam (400mg) (Piracetam) Diaphragmatic Hernia How to Reduce School Bag Weight - Simple Tips Sinopril (2mg) (Lacidipine)
This site uses cookies to deliver our services. By using our site, you acknowledge that you have read and understand our Cookie Policy, Privacy Policy, and our Terms of Use