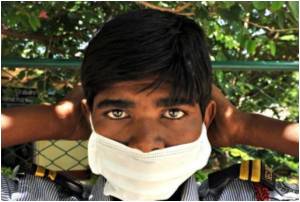 Maharashtra state health machinery on high alert after swine flu claimed four lives in Pune in the past fortnight.

Besides, the four fatalities, another 34 victims are admitted in different city hospitals.

'The condition of at least five people is critical and they have been put on ventilator. We can only hope that there are no fresh cases or casualties,' Pradip Awate, head of Integrated Disease Surveillance in the State Surveillance Office, which monitors swine flu in Maharashtra, told IANS Saturday.


In the past 11 months, the number of casualties has touched seven - one in Nashik in May 2011, followed by two in Kolhapur in September 2011 and four, including three women in Pune in March 2012, Awate said.

Find out the risks for contracting swine flu and take the necessary precautionary steps. Swine flu caused a pandemic in 2009 with several deaths reported worldwide.
Advertisement
Following the sudden spurt in swine flu in the past two months, the entire state health machinery has been geared up to face any eventuality, he added.

The extended winter in early February in the state, the intermittent sharp disturbances during the winter to summer transition phase, and declining immunity among the masses are reasons for the recent rise in swine flu cases.

Since the disease is considered at peak in the winter months, the health authorities are hopeful that it will decline from early or mid-April onwards.

'If not, then we are prepared to tackle it even during the monsoon and post-monsoon months,' a grim Awate assured.

The first death of swine flu in India occurred Aug 3, 2009, when the disease claimed Rhia Shaikh, a 14-year old schoolgirl.

In the past four years, the districts of Pune, Satara, Nashik and Mumbai city have been among the worst hit by the swine flu virus, notching the maximum number of casualties.

Is the world in the grip of its first influenza pandemic in forty years? It definitely seems so! The current swine flu or pig flu disaster traces its origin to the badly- hit State of Mexico.
Advertisement
<< Frequent Dialysis Does Not Help Improve Physical Health: Ne...
Depression Linked To Early Death Risk In Coronary Stent Pat... >>