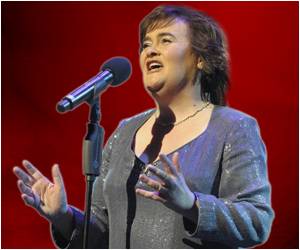 Susan Boyle, the singing sensation has revealed how her school years were ruined by fainting fits after she was diagnosed with epilepsy, the neurological disorder.

The singer has previously revealed that she was teased and tormented by classmates because of her learning disabilities while growing up in her native Scotland.

The 50-year-old singer has now said that her problems were heightened when doctors told her she was suffering with the neurological disorder, which is characterized by seizures.


"I was protected in cotton wool. They (parents) thought they were doing the right thing. They called me touchy. At school I used to faint a lot. It's something I've never talked about. I had epilepsy," Contactmusic quoted her as telling Daily Mail's Weekend magazine.

"People in the public eye don't have things like that. All through my childhood they'd say epilepsy is to do with mental function. And now I realise it's not. I was up against all those barriers. It wasn't easy," she added.

Exorcism  Driving Out the Devil

Exorcism or the ritualistic act of driving out evil spirits is a special type of faith healing. The heated Psychiatry vs Exorcism debate still goes on....
Advertisement