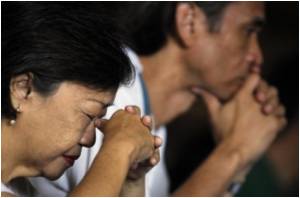 A raggedy cloth banner in a Philippine town torn apart by one of the most powerful typhoons on record declares that its residents are "roofless, homeless, but not hopeless".

Super Typhoon Haiyan left more than 7,500 people dead or missing and ruined the homes of about four million others when it tore across some of the Philippines' poorest fishing and farming communities.

A month after the typhoon struck, the battle for survival remains undeniably desperate in squalid towns, where masses of survivors huddle on roads still choked with debris while waiting for noodles, rice, water or other essentials being handed out by relief workers.


But the hand-painted message on the banner, hanging above a shop front being repaired on the outskirts of the hard-hit port city of Ormoc, represents a spirit of hope and resilience that resonates throughout the disaster zone.
Advertisement
International relief workers, who spend their lives visiting disaster zones around the world, have expressed surprise and admiration at the outwardly jovial determination of the survivors to "bangon", or rise, again.

"People are really struggling and yet the vast majority have got this incredible spirit where they just refuse to be defeated by this disaster," International Federation of the Red Cross spokesman Patrick Fuller told AFP on Friday after visiting some of the worst-hit areas in and around the coastal city of Tacloban.

And while much of the international focus in the immediate aftermath of the typhoon has been on the enormous relief effort that was initially dominated by a giant US military contingent, many survivors have quietly started rebuilding their lives using their own initiative.

In the tiny farming community of Kananga on Leyte island, about 70 kilometres (45 miles) west of Tacloban, virtually all of the coconut trees that have sustained families for generations lie worthless on the ground after being ripped apart by Haiyan's monster winds.

Farmer Pepito Baring and a group of young men were on Friday using a chainsaw in the badly damaged local cemetery to cut coconut trees, which were resting on shattered concrete graves, into planks of timber.

"It takes two trees to get enough wood to rebuild a temporary shelter," Baring, 56, said as he stood bare-chested in the fierce early afternoon sun wearing only a pair of dirty shorts and flimsy rubber sandals.

Along the 100-kilometre road between the devastated towns of Ormoc and Tacloban, there are many similar, improvised saw mills that have spurred an astonishingly fast construction boom, albeit of flimsy homes that would be equally unable to withstand another typhoon.

Countless homes of farming and urban communities have been resurrected using the "coco lumber", as well as the recycled materials of their destroyed houses and sometimes tarpaulin roofing donated by relief organisations.

The number of people listed by the government as homeless has dropped from more than four million shortly after Haiyan struck to just 94,000, with one important factor, the determination of survivors to rebuild their homes themselves using whatever means they can.

Nevertheless, the poorly rebuilt homes are just band-aids over a gruesome wound that authorities say will take many years and billions of dollars to heal.

Most areas of the central Leyte and Samar islands that were the worst hit by Haiyan remain without electricity and supplies of drinking water.

And nearly three million people remain reliant on life-saving food aid or farming support, such as crop seeds, according to the United Nations.

People living in ruined communities along the sides of major roads on Leyte write messages on boards, such as: "Help us, we need food", in the hope of getting a relief truck to stop.

Yet, desperation should not always be confused for despair.

In one devastated coastal community on the outskirts of Tacloban, hundreds of people queued on Friday for what they said were their first supplies of bottled water for a week.

Among them was Rosalinda Tabao, 55, a mother-of-six who lost her shanty home, her vegetable-stall business and three cousins when Haiyan's tsunami-like storm surges swept across their town.

Tabao said her family lost everything, including all their money and the vegetable crops on a small plot of land they rented and which supplied her vegetable stall.

But Tabao refused to be defeated.

Four days after Haiyan struck, Tabao made a seven-hour bus trip to Ormoc and bought 500 pesos ($12) worth of Chinese cabbage seeds using money donated by her mother-in-law, and sent her husband to plant them on their tiny farm.

"They should be ready in a month," Tabao said as she stood in the queue waiting for water. "Once they are ready, I'll sell them and use the money to buy more seeds, maybe eggplant."

Like her neighbours, Tabao and her husband had also quickly rebuilt a temporary shelter where their old home stood using salvaged materials.

Asked about her strongest emotions over the past month, Tabao said: "I hope. As long as I live, I'll continue to hope."

Source: AFP
Advertisement
<< Skin Diseases and How It Affects the Body
First Gay Marriages in Australia Conducted Even Before Cour... >>

WHO Says Many Philippine Typhoon Victims Had a Long Wait for Treatment
Many people who suffered serious injuries when a powerful typhoon ravaged the central Philippines .....

Mass Vaccination Programme in Typhoon-hit Philippines
Mass vaccination to protect children from measles and polio has been launched in typhoon-hit ......