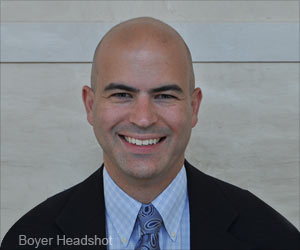 In the recent years, the use of stereotactic body radiation therapy (SBRT) to treat patients with stage I non-small cell lung cancer (NSCLC) had a positive impact, according to a new analysis of records in the Veteran's Affairs Central Cancer Registry. Escalated adoption of this advanced form of radiation therapy (RT) from 2001 to 2010 was associated with substantial increases in overall survival (OS) rates and lung cancer specific survival (LCSS) rates.

"Lung cancer causes more than one million deaths each year worldwide," said Matthew Boyer, MD, PhD, lead author of the study and a resident in radiation oncology at Duke University in Durham, North Carolina. "Moreover, an increasing number of localized, or stage I, lung cancer diagnoses are occurring, due to an aging population and advanced screening techniques."

Lung cancer is a malignant tumor in the lung tissues. Smoking is the main cause of lung cancer with symptoms like recurrent respiratory diseases.
Advertisement
‘The overall and lung cancer specific survival rates were significantly higher for patients who received stereotactic body radiation therapy than those who received conventional radiotherapy.’

While the majority of patients with stage I NSCLC underwent surgery, RT is recommended for patients who cannot tolerate surgery or desire non-surgical management. SBRT, which was developed in the 1990's, uses advanced imaging techniques to deliver highly-targeted radiation to a tumor and limit damage to surrounding tissue. Preserving healthy tissue is particularly important for NSCLC patients, whose tumors are located near or in essential organs including the heart and lungs.


Researchers sought to determine whether the increased use of SBRT in recent years had a subsequent impact on the outcomes of patients with NSCLC. Using the Veteran's Affairs Central Cancer Registry (VACCR), they identified more than 14,000 patients diagnosed with stage I NSCLC from 2001 to 2010, including 3,012 records of patients who received RT as their primary treatment. From this cohort, 468 patients were identified who had SBRT and 1,203 patients who received conventional RT (i.e., the CRT group). Data regarding fractionation, co-morbidities, treatment toxicity, PET utilization and vital status were obtained from the VA Corporate Data Warehouse (VACDW).

Average survival rates for all patients increased over the study period, as did the use of SBRT. Four year OS for study participants as a whole who underwent radiation rose from 12.7 percent to 28.5 percent and four year LCSS rose from 33.9 percent to 50.4 percent, concurrent with increased utilization of SBRT from 4.7 percent to 60.3 percent.

"It is very rare for a study to show that double the number of patients were likely to be alive at four years due to the introduction of a new treatment," said Dr. Boyer. "We identified that this doubling was due to the introduction of these advanced radiation techniques collectively termed stereotactic body radiation therapy, or SBRT. These findings of improved survival in stage I lung cancer patients in general, and those undergoing radiation specifically, are generalizable to patients outside the VHA. Although a number of studies are underway to define the best treatment for stage I non-small cell lung cancer, our study, and others, indicate that advances in radiation treatment and delivery can improve patient survival and that SBRT should be the standard treatment for patients treated with radiation for stage I NSCLC."

The research was presented at the 58th Annual Meeting of the American Society for Radiation Oncology (ASTRO).

Low Doses of Arsenic Cause Lung Cancer in Mice

Researchers at the National Institutes of Health have found that mice exposed to low doses of arsenic in drinking water, similar to what some people might consume, developed lung cancer.
Advertisement
<< Stereotactic Radiosurgery Decreases Local Recurrence of Brai...
New Bowel Cancer Test Reduces Number of Endoscopies >>