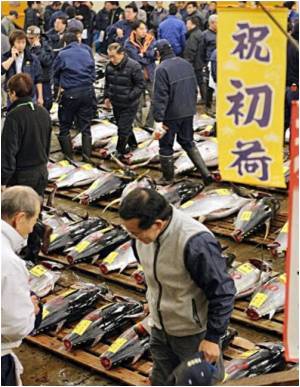 A survey by the Japan National Tourism Organisation says that foreign tourists visiting Japan enjoy sushi above any other national dish.

The state-run agency said it interviewed more than 15,000 foreign tourists as they left Japan and asked what their favourite food had been during their visit.


Ramen, a noodle soup that originated in China, came in second with 21 percent of visitors placing it top, just ahead of sashimi -- bite-sized slices of raw fish.

Tempura -- fish, shellfish or vegetables deep fried in batter -- was fourth and udon, a thick noodle made from wheat flour, was fifth.