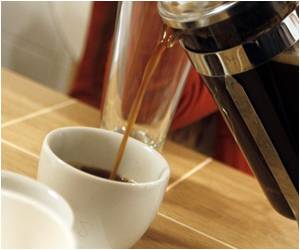 A survey has revealed that nurses consume the most coffee closely followed by the physicians.

The study, which was conducted by Career Builder and Dunkin' Donuts wanted on more than 3,600 workers, found that more than two in five Americans say they are less productive without coffee.

40 percent of those surveyed between the ages of 18-24 admit they can't concentrate without coffee.


The study also found that 37 percent of American workers drink two or more cups of coffee during their workday, ABC News reported.

The 12 heaviest coffee drinkers are:

Caffeine is a psychoactive stimulant alkaloid commonly found in many of the products we consume daily. Excess intake of caffeine can lead to symptoms similar to substance addiction.
Advertisement
<< New Virus Targets US Kids
Poorer People Less Likely to Follow Healthy Lifestyle >>

Top Health Tips to Overcome Tiredness
News Archive
News Resource
Advertisement
News Category
How to Reduce Needle Anxiety in Children? Tobacco Addiction: Here's How to Break the Habit Parents are 'Winging It' on Their Kids' Mobile Use Ankle and Ankle Movements While Riding an Hoverboard Is It Healthy to Let Your Mind Wander?
More News
Sign up for Wellness Consult a Doctor Sign up for Selfcare