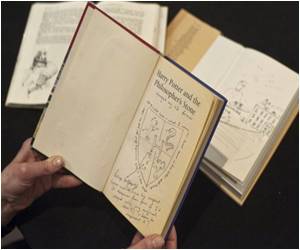 A new survey has revealed that Harry Potter, Fifty Shades of Grey and The Bible have been named the most popular books of all time in British households.

According to the survey, only one-in-five plan to re-read books they have already read, but cling on to them anyway because they become part of their furniture, the Sun reported.

The other titles that were seen in nearly every household in Britain are Pride and Prejudice, Wuthering Heights, Jane Eyre and The Hobbit.

The Da Vinci Code by Dan Brown and To Kill a Mockingbird were also popular choices.
Advertisement
Cook books by Jamie Oliver as well as The Official Highway Code were also found in most homes.

The survey also revealed that 25 percent people pretended to have read certain books to make themselves sound intellectual.

Elisabeth Robinson from Bookmark Your Library, who conducted the search, said it was refreshing to see how varied the list of books is.

The Way Wizard Genes Work Has Been Uncovered By A 'Harry Potter' Fan
A diehard Harry Potter fan and biology student may have found the scientific explanation for how ......

Swine Flu Continues Its March Around the World Even As Harry Potter Celeb Falls Victim
Swine flu infected one of the main stars in the latest Harry Potter movie, a publicist said ......

'Jailed' Harry Potter Novels Fetches Handsome Collection at Charity Auction
A set of seven Harry Potter novels signed by J K Rowling that had been put into prison for sake ......