Surgery Topped With Wrong Training Would be 'Catastrophic' for Tiger Woods 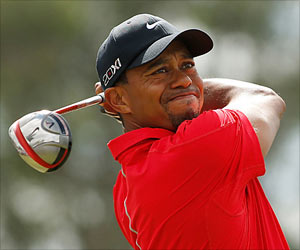 This week, in just his second tournament of the season after returning from surgery on a pinched nerve in his back, more problems emerged as Woods' complained that his glutes keep shutting off. Renowned sports movement specialist Broughton, the former professional footballer who now runs his own company 'Surpass Fitness' revealed Woods' woes and what is causing them.

A Year After Scandal, Tiger Woods is Seeing Different Girls

A year after the infamous Thanksgiving weekend car wreck that ignited golfer's sex scandals, it seems love-rat Tiger Woods is back to his old tricks.
Advertisement

Broughton said, "One needs to track back through Woods' injury history, adding that when somebody's structure is changed through surgery their natural body sequencing and the way they move would change forever. Normally the glutes are switched on in sequence. I would suggest something in the chain is out and therefore the exercises Woods is doing aren't working. The knee obviously sits between the foot and the hip and these would be trying to protect the knee by limiting the range they use. With the wrong training on top, it's catastrophic, and unless that sequencing is corrected slowly, a series of compensations would start to occur. One surgery leads to two surgeries, leads to three, leads to four and all of a sudden one has a body out of sequence and therefore muscles not firing in sequence. The gluteal muscles are extremely important in human movement and especially in a golf swing. In a right-handed player like Woods, the left glute med or buttock absorbs and decelerates all the power and mass traveling through the ball. If Woods can't activate it he would have a big problem in his back."


Tiger Woods' hopes of a 15th Major seem further away than ever after the American superstar pulled out of the Farmers Insurance Open after just 11 holes this week, and it was followed by a career-worst 82 in the second round at Phoenix last week.