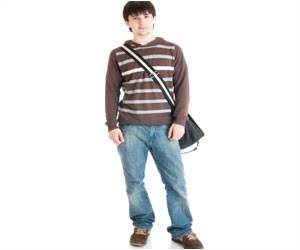 At the age of 18, a teenager from Nagpur, India, has finally had his 18 cm tail removed by surgeons after hiding the defect all his life.

The young man, went to hospital complaining the growth had become painful. Doctors explained it was a vestigial tail that developed while he was in the womb - but should have disappeared naturally over time.

Adolescent girls in families with a history of breast cancer or a high-risk BRCA1/2 mutation do not experience negative psychological effects, suggests a new study.
Advertisement
‘Neurosurgeons in Nagpur successfully removed an 18-cm long human tail from the back of an 18-year old boy after its abnormal growth turned painful for him.’

A neuro-development abnormality had meant it continued to grow while his spine was forming - despite the body usually absorbing the tail to form the back. Head of Neurosurgery department, Super Specialty Hospital, Pramod Giri, said the boy was happy as he was able to sleep on his back after a very long time.

New guidelines from the American Academy of Pediatrics are designed to help pediatricians identify more serious depression and suicidal tendencies among teens.
Advertisement
"He had a tail on his back since a long time and it was still growing. He started facing problems recently, so he consulted our OPD (Out Patient Department). His tail was 18-cm long, due to which he used to face problem while sleeping on his back. Cosmetically, it was a problem too. Till now he was hiding the tail, but after he started facing problems, he came to the OPD," added Giri.

After six weeks of pregnancy, every growing baby possesses a vestigial tail - but it normally disappears during development as it grows to become the spine and nervous system. However, sometimes children are born with one as a result of it continuing to grow - but there have only been 23 cases reported worldwide.

They contain adipose and connective tissue, blood vessels, nerves and are covered by skin. Doctors say they are harmless and can be easily removed because they lack bone and cartilage.

But the abnormality can affect the bladder and reduce bowel control. It has also been known to result in extreme pain and a loss of function in the lower body. The surgery to remove the growth was not complex but because it involves part of the spinal cord they had to be cautious, doctors said.

Teenagers who seek help for depression can become frustrated by the burden of making appointments, finding providers and accessing services.
Advertisement
<< Recommendations To Stop Spread of Dog Diseases
Rapid Tests to Diagnose Serious Infections in Children >>

Blood - Sugar Chart Iron Intake Calculator Accident and Trauma Care Diaphragmatic Hernia Nutam (400mg) (Piracetam) Drug Side Effects Calculator Hearing Loss Calculator How to Reduce School Bag Weight - Simple Tips Find a Hospital Post-Nasal Drip
This site uses cookies to deliver our services.By using our site, you acknowledge that you have read and understand our Cookie Policy, Privacy Policy, and our Terms of Use  Ok, Got it. Close
×