Surfing Takes Off in Liberia 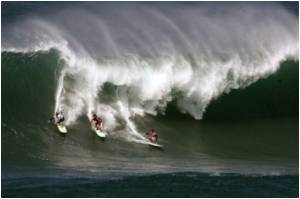 As the monstrous wave rears up behind him like a frothing beast, Sam Brown Jr allows himself a grin and a thumbs-up as he snaps onto his longboard.

The 21-year-old Liberian has joined a growing number of surfing devotees in the west African nation of Liberia, attracted by the perfect waves in what is being touted as one of the world's last genuinely unspoilt paradises for the sport.

Surfing the Internet is changing the way our brains work, reducing our ability to think and concentrate, a leading psychologist in the UK has warned.
Advertisement

"What makes surfing in Liberia so good is the waves," Brown says as he settles back on the beach, evidently pleased with expressing an obvious insight but one that bears repeating to send a message to surfers worldwide.


Liberia is still known around the globe for back-to-back civil wars between 1989 and 2003 that left more than 200,000 people dead and the country in ruins, with images of drugged-up child soldiers brandishing machine guns beamed across the world.

An employee of a US infrastructure company had outsourced his job to a Chinese company, and spent his days surfing the Internet at his workplace.
Advertisement
But surf tourism is slowly picking up and the country is gaining a reputation for its faultless left-hand point breaks -- locations where waves break offshore -- its spectacular beaches and water as warm as the welcome from the friendly locals.

Legend has it that the first surfers appeared in Liberia in the 1970s, but it wasn't until a film about the nascent sport began winning awards at festivals in 2008 that a steady stream of tourists began.

US student filmmakers Nicholai Lidow and Britton Caillouette had come in 2006 to shoot "Sliding Liberia", which tells the story of Alfred Lomax, who became the country's first surfer after finding a bodyboard in a Monrovia rubbish bin while fleeing rebels.

The film began pulling in surfers from America and Europe as well as expats living in Monrovia, who in turn encouraged locals like Brown, who lives with his parents and little sister in Robertsport, a poor northwestern fishing village.

"We didn't know anything about surfing in Liberia during the war. It was tourists who introduced the game to Liberia. When they come, we sit with them and they talk to us about the game and we listen," Brown said.

Liberia's best waves are found around Brown's village, walking distance from Sierra Leone on the Cape Mount peninsula and just up the coast from Lake Piso, a sparkling 40-square-mile (100-square-kilometre), oblong lake that dominates western Liberia.

Reaching Robertsport involves a three-hour, 70-mile drive northwest from Monrovia, mainly along a dirt track that snakes through cassava fields, palm oil plantations and dense forest which eventually give way to a stunning coastline.

Decrepit plantation-style houses, many abandoned during the war, line wide boulevards that buffer the hills on the edge of town.

A deep underwater trench off a short stretch of southwest-facing coast creates five perfect point breaks within walking distance of each other, described by those in the know as the best quality lefthanders in Africa, perhaps the world.

Claudius Bright, a 20-year-old high school student from Robertsport, has been surfing for three years and has ambitions -- if not the money -- to study agriculture at university.

"When I started surfing it was really tough because it makes the muscles tired. When we don?t have food at home to eat, we come to the water and don?t surf, because after surfing, you can be hungry," he said.

Brown and Bright are part of a 30-strong community that surf at Shipwreck's, one of Africa's longest left-hand breaks across from the historic cotton tree where Liberia's first president, Joseph Jenkins Roberts, carved his name after arriving by ship from Virgina in 1829 to what was then a colony for free African-Americans.

The Atlantic here swells up from the southern hemisphere, heaving itself onto the coast in a perfect peel, forming a wave surfers call a "pipeline", which they can ride for 200 yards (metres) or more.

Moritz Fahsig, 38, and his girlfriend Susi Brandt, 31, have taken time away from jobs in online marketing in Munich to surf at Robertsport, lured by stories of wide open expanses of coastline a world away from the crowded beaches of Australia or South Africa.

Surfers used to have to camp on the beach but the accommodation has been rather more civilised since Sean Brody and Daniel Hopkins, both 29, opened Kwepunha Retreat, Liberia's first surf school with rooms, five years ago.

"I can't say the sport of surfing is single-handedly keeping the peace but I believe there is a strong correlation," said Brody, the brother of US actor Adam Brody of "The O.C." fame.

Kwepunha runs a sharing system allowing local youngsters to borrow surfboards on condition that they are attending school, taking part in beach clean-ups, and being generally responsible citizens.

"The kids in this community, I can't say they are perfect angels -- they are arguing with each other and bickering. But they are fighting over who caught the best wave, not going back to civil war," Brody told AFP.

While some Westerners may want to keep the coastline a secret, locals in Robertsport hope the surge in surfing can help alleviate the economic and social problems of a war-ravaged community that survives on the meagre spoils of artisanal fishing.

Brody, who has a masters degree focusing on sustainable tourism, believes a tourist influx is inevitable, but is determined to ensure that new visitors, surf schools and hotels preserve Liberia's culture and environment and benefit the local economy.

"Tourism will come. It's just important to us to be here early on to try to set up a sustainable model," he said.