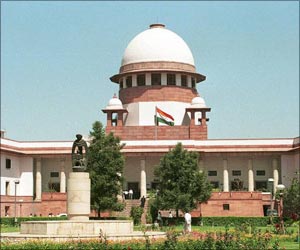 A woman in Kerala succumbed to the injuries because of a dog bite and could not be cured despite undergoing treatment. The Supreme Court has directed the Kerala government to pay Rs. 40,000 to her husband, Jose Sabastin.

Noting that unless an ex-gratia amount was paid, the victim's family was not in a position to sustain itself, the bench of Justice Dipak Misra and Justice Shiva Kirti Singh said, "We think it apt to direct Kerala to pay a sum of Rs. 40,000 to the applicant (Sabastin) within four weeks."

Scientist has revealed that young, unsupervised children are most at risk for dog bites, usually from family pets and that if they bite once, they will bite again with the second attack
Advertisement
‘The Supreme Court has directed the Kerala government to pay Rs. 40,000 to Jose Sabastin whose wife died after being bitten by a dog and could not be cured despite undergoing treatment.’

The court was told that Sabastin, who has two children, was working as a bus driver and his wife was working in the Mahatma Gandhi National Rural Employment Guarantee Scheme (MNREGS).


However, the court made it clear that it would not henceforth entertain any application for payment of compensation to victims of dog bites as it has constituted a three-member fact-finding committee to look into such complaints.

Dog Bites are a Cause of Concern in England

There has been a 55% increase in the number of hospital admissions in England due to dog bites, and some of them have been serious enough to need surgery.
Advertisement
"Any person intending to avail this kind of remedy has to move the committee and not directly come to this court or move the high court," the court said in its order.

Counsel V.K. Biju, appearing for Sabastin, said that the applicant's wife succumbed to the injuries because of the dog bite and could not be cured despite undergoing treatment. Biju told the court that because of inadequate action by the state, the number of victims has risen in Kerala and also led to a 'catastrophe', for the deaths ruined the families.

Addressing the issue of menace caused by dogs and remedies for the victims, the court set up a three-member fact finding committee comprising a former judge of the Kerala High Court, Justice Siri Jaga, the law secretary, law department and director of health services of Kerala.

"The committee," the court said, "shall entertain the complaints with regard to the injuries sustained by people in dog bites, the nature and gravity of the injury, availability of medicines and the treatment administered to them, the failure of treatment and its cure and in case of unfortunate death, the particulars of the deceased and the reasons behind the same".

"The committee," the court said, "shall also identify the centers/hospitals where the anti-rabies vaccines are available free of charge".

The court said that on the basis of the facts recorded by the committee in each case, it would be in a position to think of granting compensation or making certain arrangements.

According to a report, dog bites to the face are a relatively common injury in young children, and often require repeated plastic surgery procedures to deal with persistent scarring.
Advertisement
<< Protein 'calpain 14' Responsible for Damage in Eosinophilic...
Ebola Claims Another Victim in Rural Guinea >>

Find a Hospital Nutam (400mg) (Piracetam) A-Z Drug Brands in India Sanatogen Blood Pressure Calculator Drug Side Effects Calculator Vent Forte (Theophylline) How to Reduce School Bag Weight - Simple Tips Noscaphene (Noscapine) Hearing Loss Calculator
This site uses cookies to deliver our services. By using our site, you acknowledge that you have read and understand our Cookie Policy, Privacy Policy, and our Terms of Use