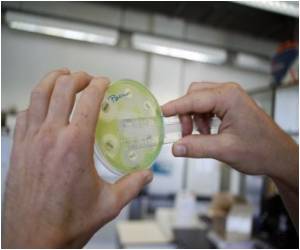 Bacillus stratosphericus has been identified as efficient and new source of electricity.

Bacillus stratosphericus - a microbe commonly found in high concentrations in the stratosphere orbiting the earth with the satellites - is a key component of a new 'super' biofilm that has been engineered by a team of scientists from Newcastle University.

Cyanide fishing and rising water heat causing the ruins of corals off Bali found hope until a diver inspired by a German scientist's facilitated in developing a project now simulated worldwide.
Advertisement

Isolating 75 different species of bacteria from the Wear Estuary, Country Durham, UK, the team tested the power-generation of each one using a Microbial Fuel Cell (MFC).

A UK crematorium has found that the heat generated during cremation is capable of providing enough electricity to power 1500 televisions.
Advertisement
While still relatively low, this would be enough power to run an electric light and could provide a much needed power source in parts of the world without electricity.

Among the 'super' bugs was B. Stratosphericus, a microbe normally found in the atmosphere but brought down to earth as a result of atmospheric cycling processes and isolated by the team from the bed of the River Wear.

Grant Burgess, Professor of Marine Biotechnology at Newcastle University, said the research demonstrated the "potential power of the technique."

"What we have done is deliberately manipulate the microbial mix to engineer a biofilm that is more efficient at generating electricity," he explained.

"This is the first time individual microbes have been studied and selected in this way. Finding B.altitudinis was quite a surprise but what it demonstrates is the potential of this technique for the future - there are billions of microbes out there with the potential to generate power."

The use of microbes to generate electricity is not a new concept and has been used in the treatment of waste water and sewage plants.

Microbial Fuel Cells, which work in a similar way to a battery, use bacteria to convert organic compounds directly into electricity by a process known as bio-catalytic oxidation.

A biofilm - or 'slime' - coats the carbon electrodes of the MFC and as the bacteria feed, they produce electrons, which pass into the electrodes and generate electricity.

Until now, the biofilm has been allowed to grow un-checked but this new study shows for the first time that by manipulating the biofilm you can significantly increase the electrical output of the fuel cell.

As well as B. Stratosphericus, other electricity-generating bugs in the mix were Bacillus altitudinis - another bug from the upper atmosphere - and a new member of the phylum Bacteroidetes.

Newcastle University is recognised as a world-leader in fuel cell technology.

Led by Professor Keith Scott, in the University's School of Chemical Engineering and Advanced Materials, the team played a key role in the development of a new lithium/air powered battery two years ago.

Professor Scott said that this latest fuel cell research can take the development of MFC's to a new level.

The study has been published in the American Chemical Society's Journal of Environmental Science and Technology.