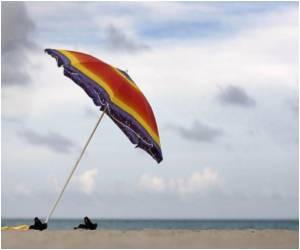 US teenagers are increasingly using sunless tanning products that could also be actively promoted to help women avoid sunburn and other harmful effects, according to two reports.

Ultraviolet radiation exposure was recently upgraded to the highest cancer risk category and is the most common avoidable cause of skin cancer, according to background information in the articles. Sunless tanning products offer an alternative method of achieving tanned skin without exposure to UV rays from the sun or from indoor tanning beds. Most of these lotions and sprays contain dihydroxyacetone, a compound that combines with amino acids in the skin's outer layer to stain the skin a tanned color.


In one article, Vilma E. Cokkinides, Ph.D., of the American Cancer Society, Atlanta, and colleagues assessed the use of sunless tanning products among U.S. adolescents using a nationally representative telephone survey conducted between July and October 2004. A total of 1,600 adolescents age 11 to 18 provided information about whether they used these products in the past year, along with details about demographics, skin type, attitudes and perceptions of sunless tanning and other sun-related behaviors.


Of the teens surveyed, 10.8 percent reported using sunless tanning products in the past year. Those who used them tended to be older and female, to perceive a tanned appearance as desirable, to have a parent or caregiver who also used these products and to hold positive beliefs or attitudes about them. In addition, the use of sunless tanning products was associated with indoor tanning bed use and a higher frequency of sunburn.

"Our findings suggest that in adolescents, use of sunless tanning products appears independently correlated with risky UVR exposure behaviors (indoor tanning and having had sunburns in the previous summer) but not with routine use of sunscreen," the authors write. "Adolescents, therefore, must be educated about these products and the importance of avoiding indoor tanning and practicing sun-protective behaviors."

In another article, Sherry L. Pagoto, Ph.D., of the University of Massachusetts Medical School, Worcester, and colleagues recruited 250 women who were sunbathing at a beach to participate in a cancer prevention intervention study. Of these, 125 were assigned to receive information about skin cancer and sunless tanning. In a tent on the beach, trained research assistants provided the women written and verbal application instructions for sunless tanning products and information about the benefits of sunless tanning as compared with the risks of UV exposure. Participants had a UV-filtered photograph taken, which exposes skin damage not visible to the naked eye, and received free samples of sunscreen and sunless tanning products. The other 125, the control group, received free cosmetic samples not related to skin health and told they would be contacted for follow-up.

"Encouraging sunbathers to switch to sunless tanning could have an important health impact, but sunless tanning has been considered a cosmetic more so than a health care tool," the authors write. "These findings have implications for public health and clinical efforts to prevent skin cancer. Promoting sunless tanning to sunbathers in the context of a skin cancer prevention public health message may be helpful in reducing sunbathing and sunburns and in promoting the use of protective clothing. Future research should determine how to further convince tanners to switch to sunless tanning."(Arch Dermatol. 2010;146[9]:987-992, 979-984. Available pre-embargo to the media at www.jamamedia.org.)

"Tanning for reasons of appearance, such as to look better or healthier, can be immediately satisfied with sunless tanning, but sunless tanning is a single hammer and there are many nails," write June K. Robinson, M.D., of Northwestern University Feinberg School of Medicine, Chicago, and editor of the Archives, and colleagues in an accompanying editorial.

"As physicians proffer sunless tanning as a substitute for intentional UVL-based tanning, it is important for them to know why and how often their patients tan. For example, an event tanner may believe that the expense of spray-on tanning is a good investment for a single event (e.g., the prom) whereas regular seasonal tanners, those who tan year-round, and those who often use tanning to improve their mood and relieve stress may be less likely to cease UVL exposure. Thus, these regular tanners may be more likely to simply add sunless tanning to existing UVL-based tanning habits."

"Because regular tanners appear to tan for reasons of appearance and mood, it is still possible that sunless tanning may help the regular tanner decrease the number of indoor tanning sessions in a month, thus achieving harm reduction when cessation of tanning is not feasible," they write. "Finding suitable stress-relieving and mood-enhancing alternatives to complement sunless tanning and substitute for UVL-based tanning would be important for these habitual tanners."

Womens Attitude Towards Indoor Tanning can be Changed With Educational Intervention
Educational literature, not increased fears of skin cancer, can change young women's use of indoor tanning, as it will promote healthier alternatives for changing appearance, according
READ MORE