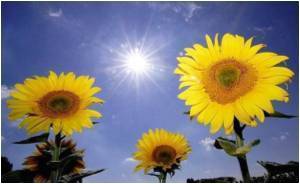 Dr Joshua Mylne and Professor David Craik from the Institute for Molecular Bioscience at the University of Queensland have discovered the way sunflower seeds assemble protein rings. The potential of one such protein ring as a cancer drug has already been demonstrated.

The study, published in the international journal Nature Chemical Biology, showed that the machinery used to process and mature otherwise dull seed storage proteins is commandeered by a protein ring, SFTI, for its own use.


Dr Mylne and Professor Craik used the model plant Arabidopsis for their research, demonstrating that the sunflower protein production system could be moved into another species and thus SFTI could be manufactured in a range of plants.

Did u know that simple changes in lifestyle could lower your cancer risks? Find out how!
Advertisement
While this work is of interest to researchers by providing an understanding of how new proteins can evolve and how proteins are matured, it has wider applications for drug production. SFTI can be used in its natural form to block breast cancer enzymes, and in a modified form to block enzymes associated with other types of cancer.

These proteins have not been broadly adopted by drug designers despite their potential to fight cancer because of the expense of producing them using traditional, synthetic manufacturing methods.

"Although SFTI and related proteins show great promise as drug templates, the cost to manufacture them is a significant barrier to widespread use," Dr Mylne said.

"This issue could be solved through plant manufacturing. Seeds are an attractive system for the production of pharmaceuticals, as they are cheap to grow and their contents are stable at room temperature, and sterile inside their coat.

"There are also established systems in place for their production, harvest, storage and transportation, meaning they could be the ultimate low-cost drug delivery system."

This work was supported by the Australian Research Council.

Interestingly it was Dr Joshua Mylne's grandfather, Alan Lemon, who had introduced the sunflower in Australia, creating a multimillion-dollar industry.