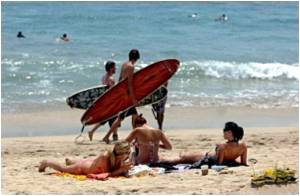 People who spend more time in sun and have increased levels of Vitamin D may be less prone to develop multiple sclerosis (MS), shown in a recent study.

MS is a chronic disease of the brain and spinal cord, usually with recurrent flare-ups of symptoms. It is often preceded by a first episode (or event) of similar symptoms lasting days to weeks.

"Previous studies have found similar results, but this is the first study to look at people who have just had the first symptoms of MS and haven't even been diagnosed with the disease yet," said study author Robyn Lucas, of Australian National University in Canberra.


"Other studies have looked at people who already have MS-then it's hard to know whether having the disease led them to change their habits in the sun or in their diet," Lucas added.

Calcium and vitamin supplements are taken to provide the body with the ''''required'''' nutrients. Calcium is a mineral found in many foods. Vitamins are very important nutrients for the body.
Advertisement
The multi-site study involved 216 people age 18 to 59 who had a first event with symptoms of the type seen in MS. Those people were matched with 395 people with no symptoms of possible MS who were of similar ages, of the same sex and from the same regions of Australia.

The risk of having a first event, diagnosed by a doctor, ranged from approximately two to nine new cases for every 100,000 people per year in this study. The reported UV light exposure of participants ranged from about 500 to over 6,000 kilojoules per meter squared.

The researchers found that the risk of having a diagnosed first event decreased by 30 percent for each UV increase of 1,000 kilojoules.

They also found that people with most evidence of skin damage from sun exposure were 60 percent less likely to develop a first event than the people with the least damage.

The study has been published in the February 8, 2011, print issue of Neurology, the medical journal of the American Academy of Neurology.

Small and frequent durations of sun exposure (about 10-15minutes) several times a week (about 3times) is a safe balance between the required levels of vitamin D and risk of skin cancer.
Advertisement
<< Myanmar Girl With 12 Fingers, 14 Toes
Medtronic's First MRI-safe Pacemaker Gets FDA Approval >>

Australian researchers have discovered an iodine deficiency among the people of an Aboriginal population and conclude that this could be the cause of ill health and disability.
Advertisement
News A-Z
A B C D E F G H I J K L M N O P Q R S T U V W X Y Z
What's New on Medindia