Successful Implantation of a 3-D Printed Vertebrae by Indian Surgeons 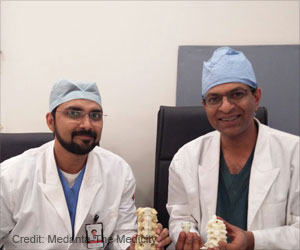 The first 3-D printed artificial vertebrae implantation in India was found to give a new life to 32-year-old tuberculosis patient. The spinal reconstruction conducted by the Indian Surgeons helped her to walk again.

The surgeon team led by Dr. V Anand Naik, Senior Consultant Spine Surgery, Bone & Joint Institute from Medanta - The Medicity, Gurugram performed the successful implantation by replacing the damaged vertebrae with a 3-D printed titanium vertebrae that may help to bridge the gap between the first and fourth cervical vertebrae.

Spinal fracture or spinal compression fracture indicates an injury to the spinal column. Along with the vertebrae, spinal fractures can also damage the nerves, spinal cord or ligaments in the spine.
Advertisement
‘Indian surgeons successfully implanted a 3-D printed vertebrae to a 32-year old women that helped her to walk again.’
Tweet it Now

Due to a pending history of infertility, the patient was found to suffer from tuberculosis due to high intake of steroids, which has lowered her immunity to a level where the patient can develop TB at 10 different vertebrae in the spine.


The first three cervical vertebrae was severely damaged to an extent where they was no skeletal support that is available between skull and lower cervical spine, due to which the head was moving forward and curved in a way that causes obstruction to the spinal cord and causes progressive weakness in the limbs (paralysis caused by illness), compression of the respiratory nerves and death.

Benefits of robotics-assisted surgery include smaller incisions that significantly lower the chance of wound infections and shorter post-surgical hospital stays.
Advertisement
The 10-hour long surgery is one of its kind which involves complex spinal reconstruction. This surgery is the first one to be performed in India and third in the world following China and Australia for different parts of the spine.

Dr. V Anand Naik, said, "it was a very complex surgery and the patient's condition was deteriorating each day. It would not have been possible to do it without a 3D printing technology."

"It is comparatively an effective method of surgery since everything is planned before, and also a new dimension to complex spine reconstruction in difficult anatomy and complex Tumors and infections," he added.

Dr Gopal Kumar, Consultant, Head & neck oncosurgeon at Medanta-The Medicity, said, "The challenge for our team was to reach high into the neck without altering the position of the patient. Anterior approach, small working field, in cases such as these is not basis one's choice but a necessity. Patient being a singer, preservation of laryngeal nerve was of prime importance. Swallowing, chewing and movement of tongue, all was at risk. After mobilisation and retraction of larynx and oesophagus space was created for Dr. Anand to work and perform the implant."

The team used an intricate computer software to plan the detailing of the operation. Titanium cage inside the 3-D printed vertebrae was customized according to the patient's original spine. The high resolution CT and MRI scans of the patient spine was uploaded on the software and a dummy of the patient's spine was 3D printed to measure the gaps and surgical resection between the first and fourth cervical vertebrae.

The 3D titanium implant was printed and has to be placed in the body. The printed vertebrae was further tested for biomechanics and stress risers post receiving inputs from the design team in India, Sweden and USA.

The standard time that is required to plan and perform the surgery may be between three to four weeks.

The approach was planned effectively and executed within a week by Dr.Naik (Spine) & Dr. Gopal Kumar, Consultant, Head & Neck Oncosurgeon at the Medanta The Medicity.

The patient who is a teacher, was also found to recover fast with the newly reconstructed cervical vertebrae. She had recovered from all her weakness and radiculopathies (condition due to compressed nerves in the spine) within 4 days of surgery and is able to walk again now.

The doctors also stated that she will be able to lead an independent and risk free life within 2 weeks.

Dr. SKS Marya, Chairman, Institute of Bone & Joint, Medanta-The Medicity said, "Medanta believes in constant innovation in Medical technology and Healthcare practices. The outcome of the surgery clearly demonstrates our commitment towards improving the standards in patient care. Our team of doctors have introduced a path breaking solution in a complicated case such as this. They have worked very hard and we are extremely happy with the results as the patient is gradually moving back to normalcy."

Surgery For Spinal Fracture Can Reduce Death Risk by 44%

A new study has suggested that surgery reduces the likelihood of death by up to 44 per cent for those suffering spinal fractures, compared with those who are just given bed rest and painkillers.
Advertisement