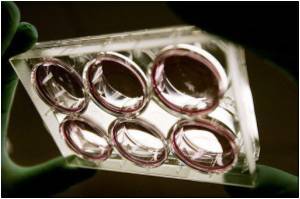 The technique, which avoids the need to genetically alter the cells to distinguish them, is a key advance for obtaining the appropriate cells for repairing specific damaged tissues, said the researchers.

The new strategy links two existing technologies for the first time- the ability to identify specific embryonic stem cell types in a culture of different embryonic stem cells, and a way to efficiently sort them at a very high rate, a procedure known as "high throughput" processing.


"Before stem cell therapy can become routine, clinicians will need a plentiful and certain supply of pure stem cells that is capable of forming the particular tissue to be repaired, and is free of contamination by other cell types. But the goal of rapidly and safely harvesting vast numbers of a single stem cell type without altering the cell's genome has been challenging," said Dr. Harold Bernstein.

Encyclopedia section of medindia gives general info about Cord Blood
Advertisement
"Here we were able to purify one specific cell type without resorting to genetically engineering the stem cells themselves, a process that can introduce unwanted traits into the cells," he added.

While embryonic stem cell cultures are made up primarily of cells that have begun to differentiate, they also include cells that remain unspecialized, and thus have the capacity to form tumours, called teratomas.

Scientists have attempted to purify stem cells-whether to eliminate those with the potential to form teratomas or to isolate specific embryonic stem cell types-by using viruses to insert DNA into the stem cells' genes.

This technique allows researchers to distinguish one type of cell from another, but this genetic engineering approach carries the risk of altering the natural makeup of the stem cells.

The UCSF scientists used a different strategy-they identified cells that can form teratomas by searching for a telltale snippet of DNA in the tumour cells' genes.

They chemically tagged these cells without altering them, and the cells were then removed on the basis of this temporary molecular tag.

They reported separating out the desired stem cells from the teratoma-forming cells at a rate of about 25,000 cells per second.

The researchers say they expect the same approach could be used to separate and purify different types of cells as they advance from the stem cell state into neurons, heart cells or any other type of tissue needed for future stem cell therapy.

"Stem cell therapy requires us to select the cells we need, to eliminate teratoma-forming cells from the desired stem cells, and to accomplish this in a high-throughput manner so that we can obtain enough cells. We show how all three goals can be accomplished at once," said Bernstein.

"We envision this as a tool that ultimately could rapidly identify and purify many different kinds of differentiating cells on their way to becoming heart muscle or pancreas or skin cells. This approach could quickly build up a large reservoir of desired cells," he added.

The study has been published online in the journal Stem Cells and Development.

No Difference Between Human Embryonic Stem Cells and Reprogrammed Cells

Whitehead Institute researchers have found that human embryonic stem (ES) cells and adult cells reprogrammed to an embryonic stem cell-like state exhibit very few differences
Advertisement
Advertisement
This site uses cookies to deliver our services.By using our site, you acknowledge that you have read and understand our Cookie Policy, Privacy Policy, and our Terms of Use  Ok, Got it. Close
×