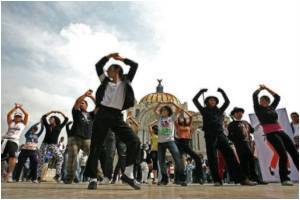 If you're hoping to snag female attention, forget the moonwalk. Instead, a study advises that men on the disco floor learn a few moves that answer the female mating drive way better.

Psychologists have identified the key male dance movements that most arouse female interest -- and all are to do with central body motions which send out primal signals of health, vigour and strength.

Women Nose Out Attraction by the 'Smell of Men's Sweat'

According to a new study, the smell of men's sweat is enough to tell women if they are attracted to them.
Advertisement

A team led by Nick Neave of Northumbria University in Newcastle, filmed 19 men aged 18-35 in a lab as they danced to a standard disco beat.


The men, none of whom was a professional dancer, wore reflective markers that studded their body and were filmed by a battery of 12 3D cameras.

The footage was used to create a dancing avatar, or animated figure, that was faceless and genderless.

Scientists have finally solved the mystery of 'beer goggles' - a phenomenon where less attractive people suddenly become more appealing when the onlooker has tipped back a pint or two.
Advertisement
Thirty-seven young heterosexual women were then shown 15-second clips of the avatars and were asked to judge which dance movements were the most attractive.

Eight "movement variables" emerged which distinguished the trolls from the Travoltas.

In contrast, "bad" dancers tended to be stiff and plod -- and throwing their arms around was no substitute for fast, variable movement of the central body region.

"Men all over the world will be interested to know what moves they can throw to attract women," said Neave.

"We now know which area of the body females are looking at when they are making a judgement about male dance attractiveness. If a man knows what the key moves are, he can get some training and improve his chances of attracting a female through his dance style."

The study was published on Wednesday in Biology Letters, a journal of the Royal Society, Britain's de-facto academy of science.

Neave said the experiment broke new ground because of the neutrality of the avatars, which gave no cues to the man's face or clothing that could sway judgement.

The outcome matches previous research that shows a preference among women for males who are strong and vigorous and skilled in their motor movements.

These are all part of a classic mating quest for the "right" genetic material, which is why the dance floor mimics courtship arenas among animals where the male struts his stuff.

"My guess is that there will be wide cultural variability about the way people dance, but the interest in the core body movements will be the same," said Neave in a phone interview.

"The movement of the trunk, the neck and the shoulders give out signals of strength, suppleness and vitality."

Neave said he was eager to do the experiment in reverse -- to create female dancing avatars and get men to judge the performance.

This experiment would help determine how far movement determines female allure in addition to body shape, facial looks, eye contact and other factors.

Contrary to popular notion, spouses do not become more similar over time, according to a team of researchers led by Michigan State University.
Advertisement
Advertisement
This site uses cookies to deliver our services.By using our site, you acknowledge that you have read and understand our Cookie Policy, Privacy Policy, and our Terms of Use  Ok, Got it. Close
×