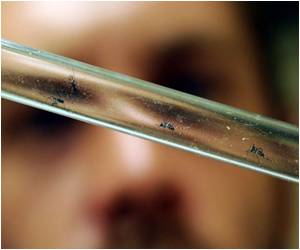 Recent research conducted by researchers shows the precise structure of the mosquito-transmitted chikungunya virus pathogen while it is bound to antibodies, revealing how the infection is likely neutralized.

The findings could help researchers develop effective vaccines against the infection, which causes symptoms similar to dengue fever, followed by a prolonged disease that affects the joints and causes severe arthritis. In recent outbreaks, some cases progressed to fatal encephalitis.

The researchers studied "virus-like particles," or non-infectious forms of the virus. They also obtained near atomic-scale resolution of the virus attached to four separate antibodies.


"We knew these antibodies neutralize the real virus, so we wanted to know how they do it," said Michael Rossmann, Purdue University's Hanley Distinguished Professor of Biological Sciences.
Advertisement
The scientists used a technique called cryoelectron microscopy to uncover critical structural details about the virus-like particles bound to the antibodies. The particles are made of 180 "heterodimers," molecules made of two proteins: envelope protein 1, or E1, and envelope protein 2, or E2.

The findings showed the precise structure of the virus-like particle bound to a key part of the antibodies, called the antigen binding fragment, or Fab, which attaches to the heterodimers making up the virus's outer shell. The analyses showed that the antibodies stabilize the viral surface, hindering fusion to the host cell and likely neutralizing infection.

Chikungunya is an alphavirus, a family of viruses that includes eastern equine encephalitis.

"This is the first time the structure of an alphavirus has been examined in this detail," Rossmann said.

The research is aimed at learning precisely how viruses infect humans and other hosts, knowledge that may lead to better vaccines and antiviral drugs, Rossmann said.

The research team conducted experiments to record the structure of the virus in different orientations and obtained a three-dimensional structure with a resolution of 5.3 Angstroms, or 5.3 ten-billionths of a meter.

The research, funded by the NIH, is ongoing and involves one graduate student and five postdoctoral students. One goal is to learn how the virus is modified when the antibodies bind to the virus and to obtain higher-resolution images.

Findings are detailed in a research paper published in the journal eLife.