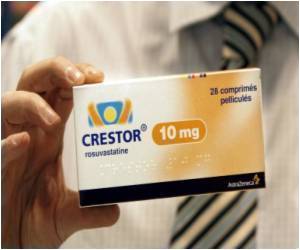 Conventional treatment for tackling high cholesterol levels is directed at reducing the level of "bad" cholesterol, LDL cholesterol, in the blood plasma.

The opposite approach, which involves increasing the concentration of "good" HDL cholesterol using nicotinic acid, has proven unpopular among patients up to now. The reason for this is that treatment with nicotinic acid has an unpleasant but harmless side-effect: the drug makes patients turn quite red in the face. Scientists at the Max Planck Institute for Heart and Lung Research in Bad Nauheim have now discovered the mechanism behind this effect, which is known as flushing. This will enable the development of flush inhibitors and thereby the more effective prevention of cardiovascular diseases. (Journal of Clinical Investigation, online version: July 26, 2010)


In addition to a healthy lifestyle, the treatment of lipid metabolic disorders is one of the important measures used in the prevention of cardio-vascular disease. Cholesterol is the key molecule here and LDL cholesterol is the type of cholesterol most widely discussed in this context. This "bad" cholesterol is one of the most important risk factors for the emergence of cardio-vascular diseases. The higher the blood-plasma concentration of LDL cholesterol, the higher an individual's risk of suffering cardiac arrest, stroke or peripheral vascular disease. The opposite applies to the "good" HDL cholesterol: in other words, the higher an individual's level of HDL cholesterol, the lower his or her risk of contracting these diseases. For this reason, the strategy of increasing HDL plasma concentration through medication has become more prevalent of late. The drug on which most hopes are pinned here is nicotinic acid.


"The main problem with treatment using nicotinic acid - which has nothing to do with the nicotine in tobacco, by the way - is flushing," says Stefan Offermanns, Director of the Department of Pharmacology at the Max Planck Institute for Heart and Lung Research. "Just a short time after taking nicotinic acid, the patient experiences strong flushing of the face and upper body for up to one and a half hours. This is caused by the dilation of blood vessels in the skin." The flushing symptoms, which are combined with a strong sensation of heat and burning, are comparable with those of sunburn, but otherwise completely harmless. However, patients often abandon the treatment on account of these symptoms.

This flushing phenomenon is a typical pharmacological problem whereby desired and undesired effects arise simultaneously. Hence, the Bad Nauheim scientists set themselves the objective of understanding the mechanisms behind the desired and, in particular, undesired effects of nicotinic acid. The results of this study are to be published in the August issue of the Journal of Clinical Investigation.

Offermanns and his colleagues had already succeeded in identifying a specific receptor for nicotinic acid that conveys the desired effects of nicotinic acid. Tests on mice, in which the gene for this receptor had been deactivated, showed, however, that the receptor is also responsible for the nicotinic-acid-induced flushing reaction. "We have now succeeded in demonstrating that the receptor exists both in the main cells of the top layer of the skin or epidermis, which are called keratinocytes, and the immune cells, known as Langerhans cells, also found in the epidermis," reports Offermanns. By studying genetically modified mouse strains in which the receptor in either the Langerhans cells or keratinocytes is blocked, the Max Planck researchers were able to show that the first phase of the flushing reaction is triggered by the activation of Langerhans cells. In contrast, the second and longer phase results from the activation of the keratinocytes. In both phases, different prostaglandins are formed through the activation of the nicotinic acid receptor. "The flushing phenomenon can be prevented by inhibiting prostaglandin formation or blocking the prostaglandin receptors in the skin, while the desired effects of the nicotinic acid on lipid metabolism remain unaffected."

Offermanns firmly believes that these findings provide a basis for the development of innovative methods for the inhibition of the undesired flushing reaction caused by nicotinic acid treatment. Several pharmaceutical companies have already started work on the development of novel "flush inhibitors" which would reduce prostaglandin formation or block the prostaglandin effect. The future administration of these inhibitors in combination with nicotinic acid would eliminate the unpleasant side effects, which have been responsible for the low level of acceptance of the drug among patients to date.