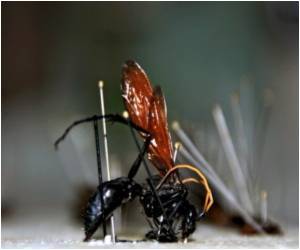 Influence in molecular, cellular and physiological levels are continuously seen in insects even after the partners go in separate ways after mating, found in a study. Understanding each of those interactions better could lead to new ways of curtailing reproduction in harmful insects, or boosting it in beneficial ones.

Mariana Wolfner, Cornell professor of molecular biology and genetics, said that molecules transferred from male to female fruit flies (Drosophila melanogaster) during mating cause a variety of changes in the female long after the male has left the scene-in some cases working in a kind of cooperative molecular ballet; and in other ways boosting the male's competitive advantage against rivals.

Pheromones are the wonder chemicals that are known to significantly influence the love chemistry and sexual attraction between a man and woman.
Advertisement

The research could also help answer key questions about chemical communication and evolution across species.


After a male and female fruit fly mate, the female undergoes a series of changes that not only improve her chances of reproductive success, but also boost the male's chances of out-propagating his potential competitors.

Good Looks Don't Count in the Evolutionary Mating Game: Strength and Stealth Do!

One might consider physical appearances to be the top priority for getting a mate, but that's not true, according to a new study.
Advertisement
Among these changes: mated females have increased appetites and produce more antimicrobial peptides that kill microbial and fungal invaders; their reproductive tracts open to allow entry and storage of sperm; and they show more resistance to mating attempts by other males.

To pinpoint the causes, Wolfner and colleagues removed individual elements in the mating process and tested the females' reactions. They first narrowed the cause down to seminal fluid proteins manufactured in the male flies' accessory gland; then removed individual proteins one by one to match specific molecules and responses.

The intermolecular dialogue is vital for reproduction in general, but it also serves functions that benefit the male and female individually, sometimes leading to a microscopic battle between the sexes, said Wolfner.

"One way to address the spread of these diseases is to interfere the ability of their insect vectors to reproduce. By understanding the molecules that enhance or impede reproduction in Drosophila fruit flies, we gain information that can help to do that," she added.

The findings were detailed at the annual meeting of the American Association for the Advancement of Science in Washington, D.C.

In its efforts to take control of dengue fever in Asia, Malaysia has released 6,000 genetically modified (GM) mosquitoes in a forest.
Advertisement
Advertisement
This site uses cookies to deliver our services.By using our site, you acknowledge that you have read and understand our Cookie Policy, Privacy Policy, and our Terms of Use  Ok, Got it. Close
×