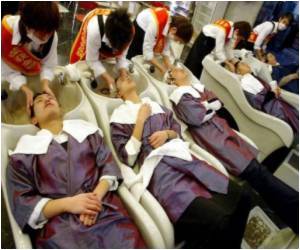 In a report aimed at the salon industry, Mintel said Tuesday that 52 percent of the men it surveyed had gone to salons, which it broadly defined as anything from a luxury spa to a corner barber shop.

Metrosexual Men have begun to believe that fairness is the key to social acceptance. Chemicals in Fairness creams can harm the skin.
Advertisement


"The men's market is growing, although it's (still) a small portion" of the overall market for beauty health and services, said Amy Ziegler, global personal care analyst at Mintel in Chicago.

Herbs to make you beautiful were used even before Charaka compiled the Samhita - the oldest text in Ayurveda. Learn about the ten herbs which can make you beautiful.
Advertisement
She attributed the trend in part to a growing number of male-specific salons -- often promoted through social media -- "that are not so scary, and less intimidating" than traditional, female-oriented establishments.

"The men who are engaged (with going to salons) are very engaged. You can call them your 'metrosexual' men who are very concerned with their appearance," Ziegler added.

"But I think there's still that portion of men who may not have been interested, but who are hearing about them, and who are willing to try... and then think, 'This isn't so bad' -- and they're going back."

Mintel, which interviewed about 2,000 men and women for its report, also found the market for grooming and beauty services growing at a higher rate among Hispanics, blacks and Asians of both genders.

Blacks are especially keen on nail care, while Hispanics and, to a lesser extent, Asians are more interested in facials and massages, Ziegler said.

Coming out of the recession, Ziegler said, there is a "shift away from DIY," with American consumers returning to salons for such treatments as hair coloring that they had opted to do at home to save money.

80% solariums allowed access to teenagers who concealed their age or claimed to be 18-years old without being able to give any proof.
Advertisement
<< Study Links Excess Maternal Iodine Supplementation With Con...
Molecular Link Between Arsenic Exposure and Lung Cancer Exp... >>