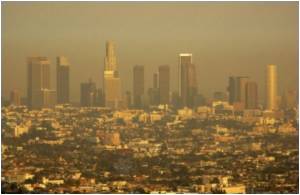 The latest findings suggest that these polluting particles, rather than scattering randomly, prefer to accumulate in specific regions of the urban environment and even form coherent structures.

The results can be used to generate maps of well and poorly mixed regions and highlight urban areas that are most susceptible to high concentration of pollutants, indicating locations need to be remedied, the journal Physics of Fluids reports.


"The unexpected finding is that coherent patterns in fluid flows have no real analog (parallel) in nature," said Wenbo Tang of Arizona State University, Tempe, according to an Arizona statement.

Air pollution is on the increase and so are the associated risks. A recently published study links air pollution near residence and cancer.
Advertisement
Wenbo co-authored the study with Arizona colleagues Brent Knutson, Alex Mahalov and Reneta Dimitrova from the University of Notre Dame, Indiana, US.

Researchers were able to verify this by using a new mathematical formula, the first of its kind, to simulate the long-term random motion of pollutant particles as would be found in the real world.

'smart' Windows That Generate Electricity Are Around the Corner