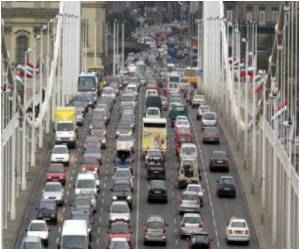 A recent study reveals that particles of toxic metals generated by cars contaminate the air and harm soil and plants.

Jose Antonio Carrero, chemist at the University of the Basque Country (UPV/EHU), Spain, investigated the impact of the metals emitted by cars and their short, medium and long term consequences.

Lead is the most well-known metal among those emitted by road traffic; even though over a decade has passed since leaded petrol was banned, the presence of this contaminant remains on the edges of roads.


Carrero had confirmed that despite its great toxicity, there are other metals that can pose even greater risks for the environment, due to the fact that they can filter through deeper soil layers, said a university statement.

Major air pollutants are associated with a higher risk of heart attack, says study published in JAMA.
Advertisement
Carrero has studied zinc oxide (produced by tyre wear) and barium, copper and antimony (resulting from brake pad wear), for example. He extracted the metals found in the samples taken and determined the concentration in which most of them occur.

Likewise, the presence of zinc is well-known, since the deterioration of the zinc plating covering the crash barriers leads to a high concentration of this contaminant in the soil immediately below.

The preliminary studies were followed up by a Raman spectroscopy analysis, which is used to identify the molecular forms in which the compounds are found. Knowing these forms helps to determine the danger posed by each metal for the environment.

And the fact is, as Carrero explained, the actual toxicity of each metal is not the only factor to bear in mind: "It matters whether the metal is in the form of a carbonate, or a nitrate. They are different salts with different solubility."

It turns out that barium and zinc are the metals that need to be closely monitored: "They are emitted as a result of tyre or brake wear, and they are accumulating in the form of oxide in the upper layers, and this has less mobility," he said.

Among barium and zinc, the more hazardous is lead, "Lead is one of the most toxic metals, but it is retained in the soil and this reduces its danger," replied Carrero.

Air pollution boosts cognitive decline in older women, reveals study published in Archives of Internal Medicine .
Advertisement
Advertisement
This site uses cookies to deliver our services.By using our site, you acknowledge that you have read and understand our Cookie Policy, Privacy Policy, and our Terms of Use  Ok, Got it. Close
×