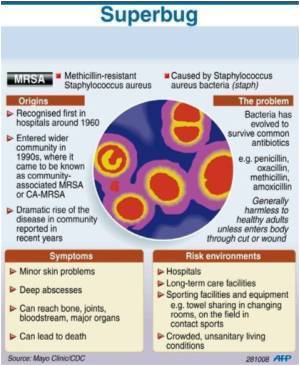 Sugars that change their shape with temperature could be a key to bacterial infection in humans, Oz researchers have revealed.

The findings could lead to new ways to treat and prevent gastroenteritis without relying on antibiotics, reports ABC Science.

Bacterial geneticist Victoria Korolik of Griffith University's Institute for Glycomics and colleagues have been looking closely at how the bacteria Campylobacter jejuni infects gut cells in animals and humans.


"This is the most frequent cause of any gastrointestinal illness around the world," she said.

The bacteria are a normal part of a chicken's gut flora and only cause disease in humans and higher primates, typically through contaminated food.

Bacterial infection of urinary bladder can cause pain and burning sensation while passing urine. Abnormal Vesico-ureteric reflex, due to which the urine goes back to the kidneys from the bladder is also known to cause infection.
Advertisement
The bacteria also cause the auto-immune disease Guillain-Barre syndrome, in which the immune system kills off the body's own nerve cells.

Two years ago, Korolik and team, including senior researcher Christopher Day, published key findings that provided the first clue to understanding why humans but not chickens are vulnerable to the bacteria.

The researchers now analysed the binding of the bacteria to a different range of glycans (sugars), which typically occur in the gut cells of animals and humans.

In both chicks and tissue culture studies, the researchers have found the sugars seem to change their shape at different temperatures to suit the host they are in.

Temperature also affects the proteins on the surface of the bacteria, but in a different way.

Korolik said if her team could confirm that the proteins and sugars they've identified enable the C. jejuni infection of humans, they could develop therapeutic molecules that can block the binding.

She said therapeutics could be added to chicken feed to reduce bacterial infection and be given to humans as a preventative or treatment for infection.

She also said the interaction between sugars in bacteria and human gut cells is also important in responding to the rare Guillain-Barre syndrome.

The interactions between sugars in bacteria and human gut cells may also have broader implications for research into treatments for food-borne infectious disease, said Korolik.

For treatment of bacterial-related food-borne disease, the research could provide alternatives to antibiotics, which is important given the problem of antibiotic resistance, she added.

The study is appearing in PLoS ONE.