Study Says Kids are Getting Heavier in the US 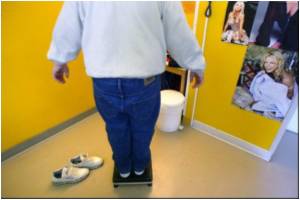 US researchers say America's children are still struggling with obesity and there has been no decline in the epidemic among young people.

In fact, the problem is getting worse in a small subset of the heaviest children, among whom the trend has about doubled, said the findings in JAMA Pediatrics, a journal of the American Medical Association.

Childhood obesity is of particular concern because it can lead to lifelong health problems, including high cholesterol, heart disease and type 2 diabetes, experts say.

"We are indeed much more than what we eat, but what we eat can nevertheless help us to be much more than what we are". - Adelle Davis There are thousands out there battling 'the bulge'. With childhood obesity on the rise even children are not spared. If your weight issues are threatening to weigh you down learn more about obesity by taking part in this quiz.
Advertisement
"It does seem overall, though, that some kids are getting heavier," he told AFP.

The latest study was based on the same data set as that released in late February, in which the Centers for Disease Control and Prevention hailed a 43 percent drop in obesity among the country's preschoolers in the past decade.

However, the new study spanned a longer period of time, a wider age range and used 1999 as its starting point, rather than 2003 when an unusual spike in obesity was observed for reasons that are unclear, Skelton said.

- Severe obesity on the rise -

The new study examined records from at 26,690 children, aged between two and 19, who took part in the National Health and Nutrition Examination Survey (NHANES) from 1999 to 2012.

Just over 17 percent were obese in 2011-2012, meaning their body mass index (BMI) was greater than or equal to the 95th percentile for their age and sex.

That was slightly higher than the figure in 1999-2000, when 14.5 were obese, but the margin of error could make the difference as small as one percent.

When researchers looked more closely at severe obesity, they found this trend was becoming more common, and had about doubled from 1999 to 2012.

Severe obesity was defined as having a BMI that was 20 to 40 percent higher than the 95th percentile of their peers.

Nearly six percent of youths now meet the definition for Class 2 obesity, and about two percent are Class 3, said the study.

The United States, where one in three people is obese, spends about $160 billion per year just treating the medical complications of carrying around too much weight, previous research has shown.

Most doctors and nurses working with children did not see February's report of sudden progress in toddlers reflected in their work, said Stephen Pont, chair of the American Academy of Pediatrics provisional section on obesity.

"We are seeing increases in rates of people who are challenged by severe obesity, who are more likely to already have a number of medical complications that are worsened and caused by their weight," said Pont, who was not involved in either study.

Research that trumpets a sudden improvement should always be taken with a grain of salt, he added.

"I would hate for people to think that all of a sudden we have stopped the adult and childhood obesity epidemic, because we most certainly haven't," he told AFP.

Experts say the problem is complex, and that it will require an all-out effort to improve eating and exercise habits across society.

"I think we need to take this really seriously," said Marlene Schwartz, director of the Yale University Rudd Center for Food Policy and Obesity.

"It is easier and more convenient and less expensive to get unhealthy foods. All the factors that influence your behavior are pushing you in the wrong direction."

The BMI calculator helps you assess your weight indicating if it is normal or if you are underweight or overweight, based on your height.
Advertisement
<< Longer Life Found in Mice Linked to Taking Human Dietary Su...
Senegal Plans to Stop Ebola With a 'Well-Oiled System' >>

Accident and Trauma Care Diaphragmatic Hernia Post-Nasal Drip Hearing Loss Calculator Iron Intake Calculator Drug Side Effects Calculator Find a Hospital Pregnancy Confirmation Calculator Blood Donation - Recipients Blood - Sugar Chart
This site uses cookies to deliver our services.By using our site, you acknowledge that you have read and understand our Cookie Policy, Privacy Policy, and our Terms of Use  Ok, Got it. Close
×