Study Says Half of Thailand's Buddhist Monks are Obese 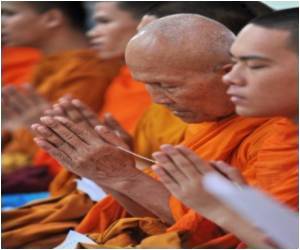 Nearly half of Buddhist monks are obese, reports study.

A study of Buddhist monks in Thailand blames their weight gain on sweet treats given to them by worshipers, Daily Mail reported.

A study of 246 monks from the Dhammayuttika Nikaya and Mahayana movements in 11 Thai provinces showed how nearly half of them were clinically obese and suffering from lifestyle diseases such as type 2 diabetes and high blood pressure.


Statistics showed that 45 percent of the monks in the study were either obese or morbidly obese, a serious health condition, and 40 percent face diseases such as diabetes and high blood pressure.

"We are indeed much more than what we eat, but what we eat can nevertheless help us to be much more than what we are". - Adelle Davis There are thousands out there battling 'the bulge'. With childhood obesity on the rise even children are not spared. If your weight issues are threatening to weigh you down learn more about obesity by taking part in this quiz.
Advertisement
They are also more likely to develop allergies due to their rich, oily, sugary diet.

One of the major causes was the amount of fizzy, sugar-loaded drinks drunk by monks, particularly in the evenings when they abstain from eating.

The research pointed to the oily, sweet foods monks are offered by worshipers being the reason behind these Buddhist monks' unhealthy lifestyle.

Food is traditionally offered to monks as they seek alms on the streets.

The BMI calculator helps you assess your weight indicating if it is normal or if you are underweight or overweight, based on your height.
Advertisement
<< Research Identifies Skin Cancer for the First Time in Wild F...
Novel Treatment Target for Deadly Brain Tumors Identified >>