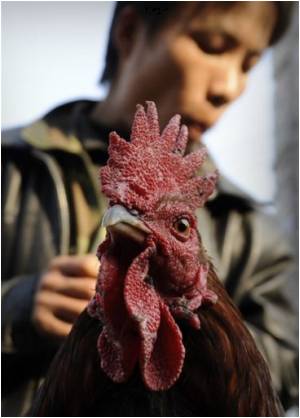 According to a recent study H7N9 bird flu strain can spread among ferrets and could do the same among humans under certain conditions.

So far there have been no known cases of human-to-human spread of the new virus, which has infected 131 people and killed 36 since it first emerged in China in March.

If the virus were found to be able to spread easily among humans, experts fear it could trigger a widespread pandemic. Animal studies are a first step toward understanding how easily the virus might spread in people.


"The emerging human H7N9 influenza is infectious and transmissible in mammals," said the study in the US journal Science led by researchers at Shantou University, the University of Hong Kong and co-authored by colleagues in the US and Canada.
Advertisement
"Under appropriate conditions, human-to-human transmission of the H7N9 virus may be possible," the study added.

Scientists infected lab ferrets with a sample of H7N9 taken from one of the people who died from it, and found that the virus spread among ferrets in direct contact, said the report.

The virus was also found to be transmissible by air, though just one of the three ferrets tested became ill in this way.

The study also tested pigs, which are considered even closer than ferrets to humans, and found that pigs could become infected but that they did not pass the virus to each other.

"If the study has shown that one pig had easily infected another pig, then I would be more concerned," said Anthony Fauci, head of the US National Institute of Allergy and Infectious Diseases.

Fauci, who was not involved in the research, said the findings should be interpreted with caution.

"Under very experimental circumstances, one mammal can infect another one by direct contact," he told AFP.

"Saying that we are now in a greater danger of a pandemic is probably an exaggeration," he added. "It's obviously something we need to keep an eye on to make sure we understand the virus better."

Ferrets that were infected did not show symptoms of illness right away, even though they had the virus in their nasal secretions, which the study authors noted was typical in pandemic and seasonal influenza.

After the infected animals were autopsied, the virus was found to be replicating in the upper as well as the lower respiratory tract, and viral RNA was detected in the ferrets' trachea, lungs, lymph nodes and brains.

"It seemed significant to me that that much virus is reaching the brain," said Suresh Mittal, a bird flu expert and professor of comparative pathology at Purdue University.

Mittal, who was not involved in the research, said that it is not unusual for certain highly pathogenic viruses to reach the brain, but it is not often seen in human flu pandemics and more research is needed.

"Physicians will be more careful looking at patients and seeing if patients develop signs of encephalitis or not," he told AFP.

Some symptoms might include confusion, dizziness, severe headache and neck pain, he said.

Overall, Mittal said the study appeared to be well done and offered important signs about the transmissibility of the virus.

"The virus seems dangerous because it does infect humans and even in the pigs the virus comes out in nasal secretions," he said.

"The main thing is how to keep this away from the pig, which is a mixing vessel."

He said that poultry and pig farms are typically kept separate in North America and Europe, lowering the likelihood that an avian influenza could emerge and jump to a pig host and eventually infect humans.

"But in China they may not be separate, so there the chances of getting the avian virus from poultry into pigs is much easier," he said.

WHO: Impossible to Predict Outcome in China's Bird Flu Outbreak
The head of the WHO said that it is impossible to predict the evolution of China's human H7N9 bird ....