Study Says Being Nice to Your Wife Could Make Her Suspicious 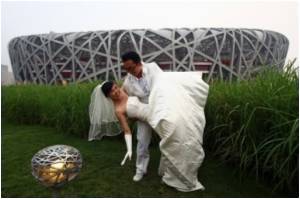 A new study says that men who are "too nice" to their other half spark fears that they are cheating.

Researchers of the study have found that two thirds of women become suspicious if their partner suddenly has "new tricks" in the bedroom, makes grand romantic gestures or even if he makes them breakfast in bed.

Other triggers for suspicion amongst mistrusting wives and girlfriends are if their man treats them to jewellery or sexy underwear.


According to the poll of 2,000 adults conducted by Kellogg's, even helping out with housework leads to millions of females to believe her chap is "playing away".
Advertisement
A third of women said they would be happy to turn a blind eye to a minor indiscretion if it meant that their partner was nicer to live with.

"It seems there is an emotional gulf between the sexes when it comes to matters of the heart," the Daily Mail quoted Louise Thompson Davies, a spokesman from Kellogg's as saying.

"So when men think they are just being nice and showering their other half with gifts and affection they think they are being attentive but the reality is that women just don't see it like that.

"Today's work and life pressures have resulted in romantic gestures like making your wife or girlfriend breakfast in bed much more of a rare occasion.

"This is why most women tend to reach for the panic button and suspect the worst when they are made a fuss over.

"The smallest changes in a man's behaviour can set a women's mind whirring and get them worrying.

"But it's interesting to see how many women would be willing to ignore their suspicions and just enjoy having a new more attentive partner.

"It seems that for some women having a romantic and thoughtful partner is more important than having one that is faithful," Davies said.

The study also found that surprise gifts of chocolates would instantly cause concern for most women, with one in six women saying that their partner has given them a gift in the past because of a guilty conscience.

The top 20 things that make women suspicious are:

New moves in the bedroom

Book a romantic weekend away

Helps more with the chores

Tells you he loves you more

Hand over the TV remote