Study Reveals the Use of Antibiotics in India 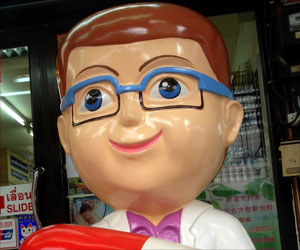 In a first of its kind study, led by Dr Srinath Satyanarayana of McGill University, and published in The Lancet Infectious Diseases, researchers used standardized patients (also called 'simulated or mystery patients') to understand how pharmacies in 3 Indian cities treated patients presenting with TB symptoms or diagnoses and to determine whether these pharmacies were contributing to the inappropriate use of antibiotics.

Antimicrobial resistance to one of the most commonly prescribed drug, ciprofloxacin, for urinary tract infections has increased by more than five times in the last decade
Advertisement
‘In India, some pharmacists are generating MDR-TB by dispensing TB medications without prescriptions. India has over 750,000 private retail pharmacies that provide easy access to drugs.’

The study aimed to assess the drug dispensing practices of pharmacies for standardized patients with presumed and confirmed TB in India.


The study results show that pharmacies frequently dispensed antibiotics to simulated patients who presented with typical/classical TB symptoms, and rarely referred them to doctors (which can delay the diagnosis of TB). However, the good news is that none of the pharmacies dispensed first-line TB drugs. Also, the use of antibiotics and steroids (which can be harmful to individuals who actually have TB), as well as the total number of medicines given, decreased sharply when the pharmacy staff decided to refer the patient to a doctor, which was far more commonly done when the patient presented with a laboratory test confirming TB.

Antibiotic Resistance Pattern Stable Among Children in the US

Antibiotic resistance patterns in children have been stable over the last seven years in the United States.
Advertisement
Novel Use Of Standardized Patients

Researchers used two trained standardized patient cases - one with a patient presenting with 2-3 weeks of pulmonary TB symptoms and a second with a patient with microbiologically confirmed pulmonary TB. Between April 1, 2014, and Nov 29, 2015, these 'trained patients' then presented each case once to sampled 622 pharmacies in 3 Indian cities (Delhi 54 pharmacies, Mumbai 308 pharmacies, and Patna 260 pharmacies), completing 1200 interactions with pharmacists. None of these standardized patients presented with drug prescriptions. They collected all the pills that were dispensed to them by the pharmacists. After each pharmacy visit, standardized patients were debriefed with a structured questionnaire within 1 hour of the visit.

Standardized patients trained as Case 1 presented with 2-3 weeks of a cough and fever and directly sought drugs from a pharmacy. The differential diagnosis for this case included upper respiratory tract infection, pneumonia, asthma and acute or chronic bronchitis. Antibiotic use might be warranted for some of these conditions, although not without a prescription from a doctor.

Standardized patients trained as Case 2 presented with 1 month of a cough and fever and a recent sputum smear positive TB test report from a government dispensary. In this case, TB was confirmed, although the patients, who posed as uninformed patients, made it clear that they did not fully understand what their report said.

Ideal management (referral to a health-care provider without giving any antibiotics and steroids) was recorded in 13% of Case1 interactions (simulated patients with TB symptoms) in sharp contrast to 62% of Case 2 interactions (patients presenting with confirmed TB diagnosis).

The most common classes of drugs dispensed for Case 1 were analgesics like paracetamol and nimesulide, antibiotics, cough syrups, and anti-allergy drugs. Overall, antibiotics (like amoxicillin), steroids (betamethasone and prednisolone) and fluoroquinolones (ciprofloxacin, levofloxacin, ofloxacin), were dispensed in 37%, 8% and 10% of the interactions respectively. The classes of drugs dispensed for Case 2 were similar to Case 1, although the overall uses were much lowerantibiotic use was significantly lower at 16% in Case 2 interactions. First-line TB drugs were not dispensed by any pharmacy.

Thus, while only some urban Indian pharmacies correctly managed patients with presumptive TB, most of them correctly managed cases of confirmed TB. No pharmacy dispensed TB drugs for either case. The study confirmed that absence of a confirmed diagnosis is a key driver of antibiotic misuse and could inform antimicrobial stewardship interventions.

Although antibiotic use is high, and such use can delay diagnosis, none of the pharmacies dispensed first-line TB drugs, and the use of stronger fluoroquinolone antibiotics and heavily restricted drug classes was low. So concerns regarding pharmacies being sources of irrational use of TB drug that contributes to multidrug-resistant TB (MDR-TB) seem to be unfounded, at least in major cities.

The use of all antibiotics decreased sharply when the patient's diagnosis was made available to the pharmacists. However, 37% of the pharmacies dispensed antibiotics or steroids to people with TB symptoms but no test results. The use of fluoroquinolones and steroids, although low, is worrying because these drugs delay TB diagnosis. Additionally, fluoroquinolones are also an essential part of MDR-TB treatment regimens and emerging regimens, so quinolone abuse is a concern.

The widespread use of antibiotics and steroids for respiratory symptoms also has implications for community- acquired infections more generally.

The study results not only add to the growing evidence of antibiotic abuse, but also underscore that the use and misuse of antibiotics are mediated by drug category and the information that patients present. Thus it seems that, as far as pharmacists are concerned, the main problem- both in the management of TB and antimicrobial resistance - is the information that patients present to the pharmacist. Confirmed diagnoses discipline what pharmacists do, with sharp increases in ideal management and large decreases in antibiotic use. This dramatic difference suggests that the main challenge faced by pharmacists is confusion about the likely diagnosis, in which case better training regarding TB symptoms and encouraging early referrals for patient with TB symptoms might help.

India has over 750,000 private retail pharmacies that provide easy access to drugs. Pharmacists respond to the health-care needs of a substantial proportion of India's population. Many TB patients do seek medical advice and drugs from pharmacies, driven by the ease of access and the possibility of avoiding consultation charges by doctors. These findings can inform interventions to engage pharmacies in TB control and initiatives to improve protect antibiotics from misuse.

"Our study clearly shows that not a single pharmacy gave away first line anti-TB drugs (isoniazid, rifampicin, ethambutol, pyrazinamide and streptomycin) without prescriptions. However, pharmacists gave away other antibiotics and rarely referred patients with typical TB symptoms, and that means they are contributing to delays in TB diagnosis. This can increase transmission of the infection in the community. So, there is great potential to harness pharmacists to identify those who need TB testing in India," he said.

A new study reveals that the number of hospital-acquired infections that are resistant to antibiotics is greater than what the CDC found in its 2008 analysis.

Indian Medical Journals Pregnancy Confirmation Calculator Find a Hospital Find a Doctor Selfie Addiction Calculator How to Reduce School Bag Weight - Simple Tips Color Blindness Calculator The Essence of Yoga Accident and Trauma Care A-Z Drug Brands in India
This site uses cookies to deliver our services.By using our site, you acknowledge that you have read and understand our Cookie Policy, Privacy Policy, and our Terms of Use  Ok, Got it. Close
×