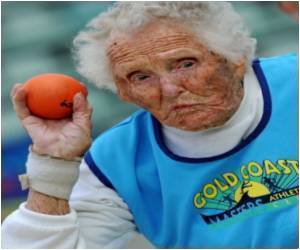 Researchers have found that genetic variants play a crucial and complex role in the exceptional longevity in centenarians.

The findings of the study by researchers from the Boston University Schools of Public Health and Medicine, Boston Medical Center, IRCCS Multimedica in Milan, Italy, and Yale University are the corrected version of work originally published in Science in July 2010.

Walking expands the hippocampus region of the brain and significantly improves a person's memory.
Advertisement

The new study includes additional authors who independently assessed and helped to produce a valid genotype data set, for which the same analysis as in the original paper was performed. It also contains an additional replication data set of subjects with an average age of 107.


Centenarians are a model of healthy aging, as the onset of disability in these individuals is generally delayed until they are well into their mid-90s.

Ageing process has always been an enigma. Recent research indicates that red wine could delay the process.
Advertisement
Because exceptional longevity can run strongly in families, and numerous animal studies have suggested a strong genetic influence on life span, the researchers set out to determine which genetic variants play roles in human survival beyond 100 years of age.

They used a well-established Bayesian statistical method for determining which single nucleotide polymorphisms (SNPs, or genetic variants) could, as a group, be used to categorize subjects as centenarians versus controls, based solely upon the genetic information.

The predictive sensitivity of the model they developed, which contains 281 SNPs, increased with the age of the subject, supporting the hypothesis that genes play an increasingly strong role in survival in centenarians.

The model was able to predict exceptional longevity with 60 to 85 percent accuracy, depending on the average age of the replication sample that was used. The older the sample, the stronger the sensitivity.

Many of the 130 known genes associated with the SNPs in the prediction model have been shown by other gerontologists to play roles in age-related diseases and aging, said the study's lead researchers, Paola Sebastiani, PhD, professor of biostatistics at the BU School of Public Health, and Thomas Perls, MD, MPH, associate professor of medicine at the BU School of Medicine.

"This is a useful step towards meaningful predictive medicine and personal genomics," said Dr. Perls, a geriatrician at Boston Medical Center.

"When people can do this kind of analysis on whole genome sequences for traits that have important genetic components, the predictive value should be even better," he stated.

The corrected study, as did the original, found that subjects who shared the same profile of variations for genetic markers in the model appeared to share similar levels of risk for various traits or diseases associated with exceptional longevity-most notably, in their ages of survival.

The revised publication appeared in PLoS ONE.

One sure approach to maintaining lasting youthful looks lies in the food that is consumed, in our daily diet. The webpage offers some great tips on preserving a wrinkle-free, glowing skin.
Advertisement