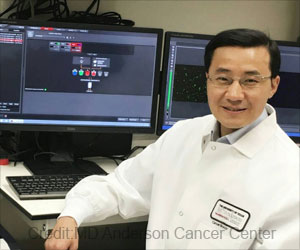 A new pathway by which cancer cells aggressively spread and grow in the brain has been discovered by  researchers. The finding opens up new possibilities for treatment.


"The poor prognosis of glioblastoma relates to the near universal recurrence of tumors despite robust treatment including surgery, radiotherapy and chemotherapy," said Hu. "Our study shows the potential for a new therapeutic strategy based on targeting the mechanisms allowing glioma to re-grow aggressively in the brain."


‘Glioblastoma (brain tumor) model to locate glioma stem cells, which, like all stem calls, have the ability to become other cell types developed.’

"We uncovered a process by which glioma stem cells mediated by the WNT5A gene become endothelial-like cells," said Hu. "These new cells known as GdECs, recruit existing endothelial cells to form a niche supporting the growth of invasive glioma cells away from the primary tumor, and often leading to satellite "lesions" and disease recurrence."

Clinical data revealed higher WNT5A and GdECs expression in these satellite lesions and recurrent tumors than was observed in the primary tumors, affirming the tie between WNT5A-mediated stem cell differentiation and glioma cell spread throughout the brain, and contributing to the cancer's lethalness.

The study established WNT5A as a key factor in glioma stem cells transitioning to GdECs. The team believes this opens up the possibility for a new therapeutic strategy for patients with glioblastoma.

Better Possible Treatments for Brain Cancer in Children
Each year, more than 4,000 children and teens are diagnosed with brain cancer and the disease kills more children than any other cancer.
READ MORE

The Saga Of Deadly Brain Cancer Cells
Adult brain cancers are almost universally fatal, in part because of the biochemical composition of the central nervous system and the blood-brain barrier.
READ MORE