Study Reveals More Than 20 Percent of Atheist Scientists are Spiritual 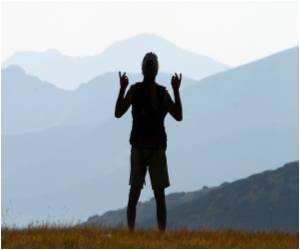 More than 20 percent of atheist scientists are spiritual, says a new study by Rice University scientists.

Though the general public marries spirituality and religion, the study found that spirituality is a separate idea - one that more closely aligns with scientific discovery - for "spiritual atheist" scientists.

We meditate to calm the mind and perceive inner self through spirituality. On the other hand, we also meditate to relieve stress and ease other lifestyle disorders.
Advertisement

Through in-depth interviews with 275 natural and social scientists at elite universities, the Rice researchers found that 72 of the scientists said they have a spirituality that is consistent with science, although they are not formally religious.


"Our results show that scientists hold religion and spirituality as being qualitatively different kinds of constructs," said Elaine Howard Ecklund, assistant professor of sociology at Rice and lead author of the study.

Meditation therapy is one of the best Alternative Therapies. It is a Mind-Body Medicine.
Advertisement
"These spiritual atheist scientists are seeking a core sense of truth through spirituality-one that is generated by and consistent with the work they do as scientists," added Ecklund.

For example, these scientists see both science and spirituality as "meaning-making without faith" and as an individual quest for meaning that can never be final. According to the research, they find spirituality congruent with science and separate from religion, because of that quest; where spirituality is open to a scientific journey, religion requires buying into an absolute "absence of empirical evidence."

"There's spirituality among even the most secular scientists," said Ecklund.

"Spirituality pervades both the religious and atheist thought. It's not an either/or. This challenges the idea that scientists, and other groups we typically deem as secular, are devoid of those big 'Why am I here?' questions. They too have these basic human questions and a desire to find meaning," she added.

"While the data indicate that spirituality is mainly an individual pursuit for academic scientists, it is not individualistic in the classic sense of making them more focused on themselves," said Ecklund, director of the Religion and Public Life Program at Rice.

"In their sense of things, being spiritual motivates them to provide help for others, and it redirects the ways in which they think about and do their work as scientists," she added.

The research will be published in the June issue of Sociology of Religion.

Yoga is one very effective exercise - to add a few inches to your height -- when done correctly and diligently. With yoga a person can cleanse oneself physically as well as improve their mental faculties.
Advertisement
<< How Obesity Spreads Among Friends and Family Demystified
People, Their Information Needs and Social Networks Reporte... >>