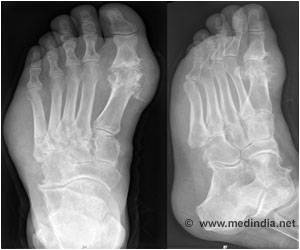 Most of the men who suffer from gout also struggle with erectile dysfunction (ED), which is frequently severe, a new study presented at the European League Against Rheumatism Annual Congress (EULAR 2014) reveals.

High levels of uric acid in blood and recurring attacks of joint inflammation are the main symptoms of gout. Lifestyle changes like weight loss, increasing fluid intake and dietary changes can help.

According to lead author Dr. Naomi Schlesinger, Chief, Division of Rheumatology and Professor of Medicine, Rutgers-Robert Wood Johnson Medical School, New Brunswick, NJ, US, "these results strongly support the proposal to screen all men with gout for the presence of ED. Increasing awareness of the presence of ED in gout patients should in turn lead to earlier medical attention and treatment for this distressing condition," she added.


Gout is a condition characterised by recurrent attacks of acute inflammatory arthritis. Around 1- 4% of the Western population will develop gout at some point in their lifetime.2 The arthritis is caused by deposits of needle-like monosodium urate crystals in the joints and is associated with an abnormally high level of urate in the bloodstream. The crystals cause inflammation, swelling, and pain in the affected joint.2

In gout excess of uric acid appears in the blood and its particles are deposited in joints as tophi.

"Because gout is commonly associated with cardiovascular disease (CVD) risk factors and coronary artery disease (CAD) and patients who present with ED also have an increased rate of CVD risk factors and concomitant silent CAD, all these patients should also be evaluated for possible silent CAD," Dr. Schlesinger concluded.ED is a common problem in the general population, with the prevalence of moderate to severe ED estimated to between 5- 20%.2 The likelihood of ED increases progressively with age; however, it is not an inevitable consequence of aging.3 The importance of vascular disease as an underlying cause of ED is well established.2

In this cross sectional study, men aged 18-89 presenting to a Rheumatology clinic between August 2010 and May 2013 were asked to participate. The presence of ED was determined by filling out a Sexual Health Inventory in Men (SHIM). The SHIM classifies ED into one of five categories: absent (26), mild (22), mild to moderate (17), moderate (11) and severe (1). The patient's history, physical examination and recent laboratory studies were reviewed as well. Descriptive statistics and subgroup analyses were used to summarise the data. Chi-square tests for independence were used to compare categorical variables.

Priapism
News Archive
News Resource
News Category
Is There a Link Between Heart Failure and Y Chromosome in Men? Male Contraceptive Pills Show Promise Common Prostate Cancer Drugs Were Less Safe: New Study Taller Than an Average Man: May Have High Risk of Testicular Cancer Do Men Infected With COVID-19 Have Semen Problems Like Infertility?
More News
Sign up for Wellness Consult a Doctor Sign up for Selfcare

Color Blindness Calculator Drug Side Effects Calculator Calculate Ideal Weight for Infants Blood Donation - Recipients Sanatogen Find a Hospital Find a Doctor Accident and Trauma Care Selfie Addiction Calculator Daily Calorie Requirements
This site uses cookies to deliver our services. By using our site, you acknowledge that you have read and understand our Cookie Policy, Privacy Policy, and our Terms of Use