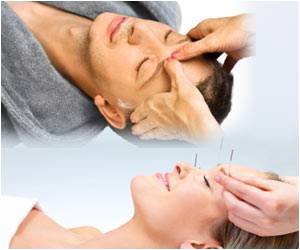 Acupuncture was found to significantly reduce levels of a protein in rats linked to chronic stress, according to researchers at Georgetown University Medical Center (GUMC).

Researchers say their animal study may help explain the sense of well-being that many people receive from this ancient Chinese therapy. Published online in December in Experimental Biology and Medicine, the researchers say that if their findings are replicated in human studies, acupuncture would offer a proven therapy for stress, which is often difficult to treat.

Acupuncture may be the answer for a cheap and effective treatment of sleep disorders.
Advertisement

"It has long been thought that acupuncture can reduce stress, but this is the first study to show molecular proof of this benefit," says the study's lead author, Ladan Eshevari, Ph.D., an assistant professor at Georgetown's School of Nursing & Health Studies, a part of GUMC. Eshkevari, who is also a nurse anesthetist as well as a certified acupuncturist, says she conducted the study because many of the patients she treats with acupuncture in the pain clinic reported a "better overall sense of wellbeing  and they often remarked that they felt less stress."While traditional Chinese acupuncture has been thought to relieve stress in fact, the World Health Organization states that acupuncture is useful as adjunct therapy in more than 50 disorders, including chronic stress  Eshevari says that no one has biological proof that it does so. So she designed a study to test the effect of acupuncture on blood levels of neuropeptide Y (NPY), a peptide that is secreted by the sympathetic nervous system in humans.


This system is involved in the "flight or fight" response to acute stress, resulting in constriction of blood flow to all parts of the body except to the heart, lungs, and brain (the organs most needed to react to danger). Chronic stress, however, can cause elevated blood pressure and cardiac disease.Eshevari used rats in this study because these animals are often used to research the biological determinants of stress. They mount a stress response when exposed to winter-like cold temperatures for an hour a day.

Tap into the powers of mind-body therapy called yoga and find out how you can use yoga for effective stress management.
Advertisement
Eshevari allowed the rats to become familiar with her, and encouraged them to rest by crawling into a small sock that exposed their legs. She very gently conditioned them to become comfortable with the kind of stimulation used in electroacupuncture  an acupuncture needle that delivers a painless small electrical charge. This form of acupuncture is a little more intense than manual acupuncture and is often used for pain management, she says, adding "I used electroacupuncture because I could make sure that every rat was getting the same treatment dose." She then selected a single acupuncture spot to test: Zuslanli (ST 35 on the stomach meridian), which is said to help relieve a variety of conditions including stress.

Eshevari is continuing to study the effect of acupuncture with her rat models by testing another critical stress pathway. Preliminary results look promising, she says.

Acupuncture and Acupressure Treatment - All About Needles and Needless Pain

Sanatogen Indian Medical Journals Drug Side Effects Calculator Post-Nasal Drip How to Reduce School Bag Weight - Simple Tips Daily Calorie Requirements The Essence of Yoga Diaphragmatic Hernia Turmeric Powder - Health Benefits, Uses & Side Effects Find a Doctor
This site uses cookies to deliver our services. By using our site, you acknowledge that you have read and understand our Cookie Policy, Privacy Policy, and our Terms of Use