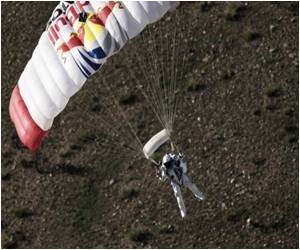 Recently, a laboratory experiment has provided a deeper insight into how Buckyballs, the molecules that resembles soccerballs form in space.

The experiments from Leiden Universityare special, as these are based on a new chemical concept - top-down, from big to small - transfering large aromatic species into interstellar graphene, fullerenes and carbon cages.

Cognitive test battery can be used to measure the impact of typical spaceflight stressors like microgravity, radiation & exposure to elevated levels of CO2, on cognitive performance of astronauts.
Advertisement

Dying stars expell large amounts of so called PAHs, polycyclic aromatic hydrocarbons. These are the same particles that are emitted on Earth by cars, contributing to air pollution. A PAH comprises of a generally flat carbon skeleton with H-atoms at the edges. They are expected to be omnipresent in space as their spectral fingerprints are visible everywhere in the Universe.


In Leiden a new setup has been constructed, iPOP (Instrument to study Photodynamics of PAHs) that has been used to catch very large PAHs in a molecular trap. The scientists subsequently irradiated the PAHs with light and discovered that once a PAH is put into the spotlights, it starts with a molecular striptease, stripping off H-atoms one by one, until the naked carbon skeleton is left over. This is nothing else than a graphene flake.

Space may be a Site to Grow 'Food Crops'

A new research project, which is funded by the EU, is set to attempt to grow food in space.
Advertisement
The new experiments make it possible to generate exotic molecules, carbon cages, fullerenes and graphene flakes, species that so far could not be investigated under isolated conditions.

Space might be littered with these exotic species. Indeed, meanwhile also C70, a molecule in the form of a rugby ball, has been identified in the interstellar medium, and also here lab data hint for a formation from even larger PAHs.

C60 Buckminsterfullerenes were discovered in space in 2010, nearly 15 years after the Nobel Prize was awarded for their discovery in the laboratory. With this discovery, C60 also became the largest identified molecule in the interstellar medium.

The deadly crash of Virgin Galactic's spacecraft has dealt a devastating setback to the cause of space tourism, delaying the first commercial flights to the stars by years, reveal experts.
Advertisement
Advertisement
This site uses cookies to deliver our services.By using our site, you acknowledge that you have read and understand our Cookie Policy, Privacy Policy, and our Terms of Use  Ok, Got it. Close
×