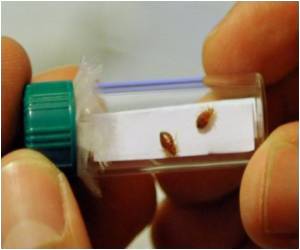 US researchers observe that the genetic analysis of bedbugs may lead to better ways to kill the pests that have terrorized homeowners and tourists around the world.

Entomologists at Ohio State University found genes that appear to be pesticide-resistant, according to their findings published Wednesday in the online Public Library of Science.

US Grappling With Bedbugs

The most powerful nation on earth is despairing what to do with such a tiny insect like the bedbugs. They are popping up everywhere, and pest control firms are having a rollicking time of it.
Advertisement

"Pinpointing such defense mechanisms and the associated genes could lead to the development of novel methods of control that are more effective," said study co-author Omprakash Mittapalli, assistant professor of entomology.


The study was funded by the US government and carried out at the university's Ohio Agricultural Research and Development Center.

"While bedbugs are poised to become one of the major household pests across the United States in the coming years, we know very little about their genetic makeup and their mechanisms of resistance to insecticides," said Mittapalli.

Getting rid of bedbug infestations in hotels and homes is a painful task, which is expensive and laborious.
Advertisement
No one has escaped the infestation, including luxury hotels in New York and Paris, costing billions of dollars annually in extermination efforts by businesses and homeowners.

The six-legged nocturnal creatures feed on blood. They don't transmit diseases but people who are bitten often suffer red, itchy welts. They can hide in box springs, closets, shoes and luggage, which allows them to travel, according to the National Pest Management Association.

The researchers called their work "the first study to elucidate the genetic makeup of the insect and to obtain fundamental molecular knowledge regarding potential defense pathways and genes that may be involved in metabolic resistance to commonly used pesticides."

They analyzed both laboratory-reared bedbugs susceptible to insecticides and pesticide-exposed bedbugs collected from an apartment in Ohio state's capital city of Columbus.

More studies are needed, they said, to confirm that some of the genes are involved in pesticide resistance.

The bedbug was a minor nuisance after World War II because of the widespread use of insecticides such as DDT, which was later stopped because it was found to be too dangerous.

Other factors for the spike in bedbugs in recent years include more international travel, increased exchange of used furniture and the development of resistance among bedbugs to current pesticides, the researchers said. They estimate bedbug numbers have increased 500 percent in the past decade.

Bedbugs May Be On Their Way Out With New Discovery

Scientists from Lund University in Sweden have made a novel discovery that may help deal with bedbug infestation.
Advertisement
Advertisement
This site uses cookies to deliver our services.By using our site, you acknowledge that you have read and understand our Cookie Policy, Privacy Policy, and our Terms of Use  Ok, Got it. Close
×