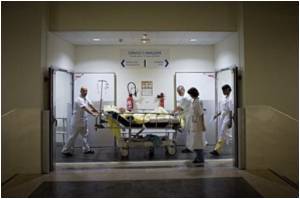 Scarring at the surgical site is the most common cause of failure after glaucoma surgery, so researchers are actively looking for ways to minimize or prevent scar formation.

Previous work had suggested that vascular endothelial growth factor (VEGF) activates fibrosis, whereas VEGF inhibition results in reduced scar formation and better surgical results. In a series of studies using a rabbit model of glaucoma surgery, investigators have determined that VEGF probably exerts its effects through induction of transforming growth factor (TGF)-β1, which may open up a new target for therapies to improve glaucoma surgical outcomes. This study is published in the June 2013 issue of The American Journal of Pathology.

"The cytokine TGF-β1 is a key mediator of wound healing and is critically involved in postoperative scarring," says Chan Kee Park, MD, PhD, Department of Ophthalmology and Visual Science of Seoul St. Mary's Hospital and the College of Medicine of the Catholic University of Korea. "Our present study shows that VEGF induces TGF-β1 production, and inhibiting VEGF reduces TFG-β1 levels ... and decreases subconjunctival fibrosis after trabeculectomy." Trabeculectomy is the surgical process by which a filtering bleb is made under the conjunctival and subconjunctival space for the aqueous humor to be driven from the anterior eye chamber, lowering the pressure within the eye.


In this study of 32 white rabbits, some underwent trabeculectomy and others remained unoperated as controls. Immediately after surgery, some rabbits received intraocular injections of 0.2 ml of VEGF at doses ranging from 1 to 50 ng/mL, while others were injected with the VEGF inhibitor bevacizumab in the subconjunctival space.
Advertisement
One of the questions addressed by the researchers was whether VEGF triggers the transformation of fibroblasts to myofibroblasts in the subconjunctiva, since myofibroblasts play a significant role in fibrosis. Using immunohistochemical staining, the researchers found that trabeculectomy activated myoblast transformation as measured by levels of Smad-positive and Snail-positive cells in the conjunctiva and subconjunctiva. This effect increased after VEGF stimulation. Similarly, Western blot analysis of proteins showed increased levels of Smad, phosphorylated Smad, and Snail after surgery, which was intensified by VEGF and inhibited by bevacizumab.

"Our findings suggest that VEGF has potential effects on the TGF-1β/Smad/Snail pathway involved in myoblast transformation. Our study gives an experimental basis for the use of anti-VEGF agents in glaucoma surgery," says Dr. Park.

New Therapy for Liver Fibrosis Discovered
Calcipotriol - a synthetic form of vitamin D could be used as a potential new treatment for liver .....

Gene Replacement in Pigs may Ameliorate Intestinal Obstruction Associated With Cystic Fibrosis
Caused due to mutations in the CFTR and characterized by lung, pancreas, liver and intestinal ......